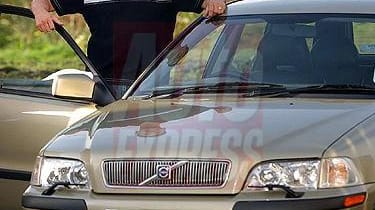 A joint venture between Volvo and Mitsubishi, the S40 and V40 line-up replaced the ageing 440/460 Series in 1996. It might look more stylish, but the S/V40 is the same as the Japanese firm's Carisma underneath, and shares parts such as the gearboxes and GDI petrol engines. That means the smallest Volvo is well engineered and economical, but compared to rivals it feels cramped and lacks sparkle. Put together alongside the Mitsubishi in Holland, the car has also raised build quality issues, as it lacks the integrity of Swedish-built Volvos. But on the whole, they're reliable, stylish cars and represent sound used value, making them a refreshing alternative to the more mainstream saloons and estates.S40/V40 Checklist * Balljoints wear out above 40,000 miles, so check for knocking when the steering is on full lock, and inspect for wear around radius arms. * Uneven brake pad wear occurs through kerbing. Make sure the car pulls up squarely and in a straight line, and examine the tyres for worn edges. * The 1.8 and 2.0-litre models don't need a cambelt change until 96,000 miles. But swap it anyway on four-year-old cars and those with no service log. * Stiff first or reverse gears mean dirt on the clutch hub or input shaft. You can fix this by cleaning them, but check the clutch for wear as well.Glass's View Supply exceeds demand, meaning there are bargains to be had. Trade bible Glass's Consumer Values says there are many high-mileage ex-fleet cars around, so haggle hard. The V40 holds its value better than the saloon.My Volvo V40 It was Peter Tandy's 14-year-old son Richard who suggested he buy a Volvo V40. As an avid Auto Express reader, Richard reckoned the estate was best for dad after working out the tax liability and deciding it was the classiest motor within the family budget. "I'd never thought of a Volvo before," admitted Peter, a 48-year-old manager from Clitheroe in Lancashire. "I thought it had an 'old folks' image, but if a teenager is OK to be seen in one, then obviously not!" Peter got a good deal on his car, a 1.8 SE, because it came from a cancelled fleet order. Only 18 months on, he has racked up 51,000 miles commuting and ferrying around his youngest son Stephen's football team. Minor niggles have included faults with the cruise control and engine cam lifters, plus a broken armrest, but these were all fixed under warranty. "Overall, I'm very pleased with it," said Peter. "The car suits my needs and the dealer service has been terrific."

The T4 is quick and looks good, but suffers torque steer and is thirsty. Diesels lack refinement, making the 1.8 and 2.0 petrols the best bets. We'd go for a post-1998 GDI-powered model, which offers you 44mpg and adequate performance. S40s are bargains, but the V40 is more practical.