The new LEVC TX taxi is set to hit London's busy streets, and we've been for a ride to see if it's up to the job 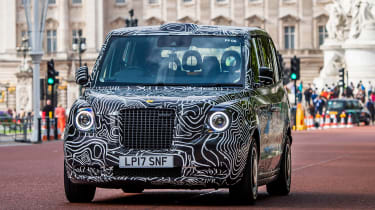 We’re frequently given the opportunity to take a ride in the passenger seat of a carmaker’s latest offering before it goes on sale. While it’s almost always a useful insight, the proof has always been in the driving experience. Here, though, a quick trip in the back seat gives the general public all they really need to know.

That’s because we’re perched in the back of the TX, a zero emissions-capable taxi built by the London Electric Vehicle Company (LEVC). You may know them better as the London Taxi Company, who have been building black cabs for decades and are responsible for the majority of the capital’s current fleet. The name change, then, illustrates how serious the new venture is.

In fact, with parent company Geely’s £325m investment in LEVC’s new manufacturing facility near Coventry, the firm has created the UK’s first dedicated electric vehicle factory to build the TX. With so much at stake financially, the new model needs to have global appeal – Amsterdam has already ordered 225, while it’s currently on display at the Frankfurt Motor Show in classic German minicab beige to drum up interest there. 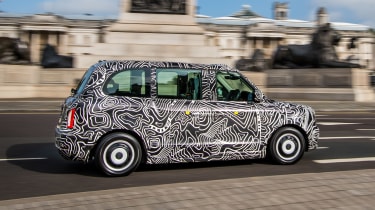 But, for now, we’re here to see if this is the right vehicle to replace a British icon and assist with the Capital’s well-publicised air quality problems. While time will tell if it’s capable of managing the former, it’s certainly could be the answer to the latter thanks to the engineering under the skin.

The TX is powered primarily by rear-mounted electric motors with a total power output of 120kW and an EV range of over 75 miles in normal use. With the 1.5-litre Volvo-sourced three-cylinder petrol generator turned on that potential range increases to 400 miles or more. Regenerative braking helps top up the battery further. LEVC’s engineers resent it being called a ‘hybrid’, lumping it in with cars like the Toyota Prius that run with the engine on most of the time.

With the average London cabbie completing roughly 120 miles a day, LEVC bosses expect most TX users to use one of Transport for London’s rapid chargers (75 will be installed by the end of this year, with double that expected by 2018) to get an eighty per-cent range top-up in 20 minutes. LEVC estimates that even in a worse-case scenario where a driver uses £50 of petrol a week, they’ll save about £100 over that period with the TX. The environmental benefits are obvious, too, with far less local pollutants and particulate emissions than the old diesel TX4 cabs. 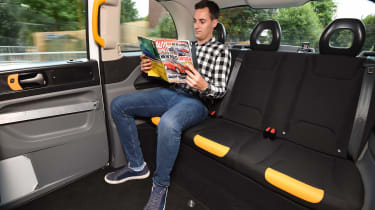 Despite this, LEVC says a small percentage of drivers have concerns, ranging from where they can charge it at home to how expensive the battery is to replace. Product Manager Alistair Fairgreave claims these can be resolved with “a bit of informed education”.

“Many drivers are of the belief that a battery has to be a disposable or expensive to maintain item. The reality is that there’s nothing a driver can do to damage the battery, short of having an accident, and our durability testing for the TX has been far in excess of what we’ve previously done”.

LEVC are so confident that each TX is offered with a five-year, unlimited mileage warranty. Given cabbies will usually cover up to 200,000 miles in that time, it’s a big commitment. In case this doesn’t quell concerns, LEVC is inviting current drivers to its London showroom to demonstrate the new model. 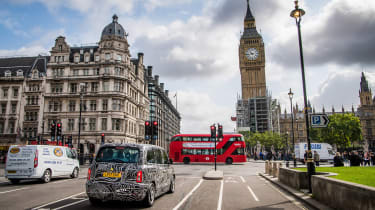 After we were briefed in a similar style to the drivers, we hit the road in the back of a camouflaged prototype with Fairgreave and Technical Director Ian Collins, a man with 23 years of engineering experience at companies such as Rover and McLaren. He’s been working on the project since its conception in early 2013, and is proud of how quickly LEVC has got the TX to market.

Although passengers won’t spend any time up there, the front compartment is the biggest revelation. It’s lifted almost wholesale from Volvo, meaning TFT dials, a crisp central touchscreen and levels of space and material quality a TX4 driver could only dream of. And while it lacks items such as lane assist or blind spot monitoring, it does retain autonomous braking, which works up to a speed of 47mph - perfect for London's congested streets.

The rear is more advanced, too – it may be a familiar layout and design, but details like touch controls for the air-con, WiFi connectivity and a three-pin charging socket make it a more business-like environment for passengers. Accessibility is improved; there’s a neat wheelchair ramp that slides out of the floor, and the rear-hinged doors make it a doddle to step in. There’s roomy seating for six now, too. 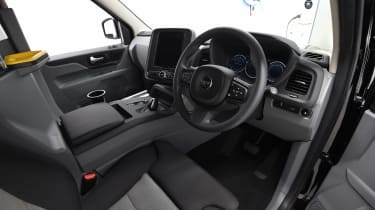 Like any EV, our ‘cabbie’ simply engaged drive and headed off, with the electric motor whirring behind our heads. Collins admits that there’s still some work to be done to insulate the motor, which at the moment is audible but not intrusive. Still, it’s far quieter than taxis of old.

The instant torque of the motor also means the TX feels pretty sprightly around town. Collins claims that the team reduced the powertrain’s output during testing as it was “too powerful”, spinning up the rear wheels without much effort. No figures for acceleration or weight are quoted, but Collins admits it weighs “about as much as a large SUV” and is capable of sitting comfortably at just over 70mph. Our journey was almost entirely in electric mode, with the range-extender firing up with a distant rumble only as a demonstration.

Obviously, we’ve no experience of how it handles, but over the speed bump infested London streets it seem to absorb all but the worst intrusions. Collins states that it’s been benchmarked against a Volvo XC90, and while it’s a way off that car’s luxurious feel this certainly feels like a cut above any taxi we’ve sat in before. And sure enough, when it’s time to turn back, the trademark super-tight 63 degree turning circle every London cab needs comes into play.

LEVC has expectations of shifting over 1,500 examples next of the TX next year, with 90 per cent of buyers expected to take advantage of the five-year weekly payment deal. And with government regulations ensuring all London taxis must have a zero emission range of at least 30 miles next year, LEVC is in a prime position to capitalise on this.