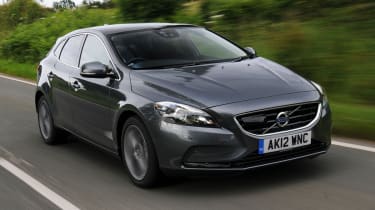 The V40 deserves to be a huge hit. Stunning looks and decent performance combined with safety innovations and low CO2 emissions make it a talented all-rounder. It’s not perfect, and the high pricing and quirky cabin may deter some buyers. But with bags of character and racy R-Design models in the pipeline, it’s set the bar high for new rivals on the way.

It's been more than 15 years since Volvo last sold a five-door hatchback in the UK, so the pressure is on for the new V40 to make an impact. It won’t be easy, though, with the new Audi A3, VW Golf and Mercedes A-Class also going on sale later this year.

The V40 would fare well in a beauty contest against its rivals, thanks to its sleek front end and tapered headlights – just like the S60 saloon’s. At the back, the glass section across the boot and curved tail-lamp clusters are inspired by the C30 coupe.

The bold design statements continue inside, most specifically with the floating centre console. The dashboard layout is a little cluttered, but plush materials and sturdy build quality make up for it.

This is a well equipped car: the entry-level ES gets Bluetooth, climate control and Volvo’s City Safety auto braking system as standard. Further eye-catching features include the beautiful frameless rear-view mirror and colourful TFT crystal dials – although the latter cost £350, even on top-spec versions.

There are areas where styling chic compromises practicality, though. A sloping roofline makes rear headroom for six-footers quite tight, and while the boot has a clever £100 optional false floor, the capacity could be more generous – it’s only 335 litres.

Our car’s 2.0-litre D3 will be the most popular engine choice after the sub-100g/km D2, and on the road it doesn’t disappoint. On cold starts it’s not as refined as one of VW’s TDIs, but the car quickly settles to a refined cruise.

With 148bhp and 350Nm of torque from a mere 1,500rpm, it feels really responsive in-gear, and quick bursts of acceleration are rewarded with a five-cylinder exhaust warble. The six-speed gearbox has a long yet accurate throw, and although the steering is not as communicative as in some rivals, it’s weighty and direct.

The V40 is the last all-new Volvo that will use Ford underpinnings – but as it shares its chassis with the Focus, it handles very well. Body roll is controlled, and on the demanding Welsh roads of our test route the D3 showed a remarkable resistance to ruts and bumps, shielding the driver from all but the worst imperfections.

Yet the most impressive thing (certainly for fleet buyers) is that, thanks to stop-start and regenerative brakes, even this sporty diesel emits only 114g/km and returns a claimed 65.7mpg.

Such figures make the V40 a hugely attractive alternative to mainstream hatches – and Volvo is rightly expecting strong sales.