Dog lovers, antique dealers and country types take note! Volvo is not the car company you may have thought it was. The all-new V50 estate is so completely different to its V40 predecessor, it's likely you'll struggle to recognise the family resemblance, even close up. 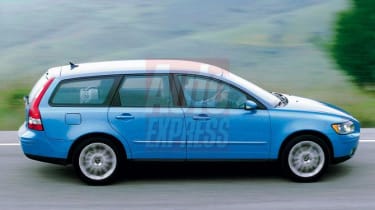 The V50 is a welcome reinvention of the V40, adding greater style, driveability and desirability to Volvo's line-up. The estate's sister car, the S40, has already won universal praise and looks set to become one of the stars of 2004. The V50 should repeat this success, despite its smaller boot.

Dog lovers, antique dealers and country types take note! Volvo is not the car company you may have thought it was. The all-new V50 estate is so completely different to its V40 predecessor, it's likely you'll struggle to recognise the family resemblance, even close up.

With smart bodywork that blends the design of the stylish new S40 with the bigger V70, and a cabin that condemns black plastics and cluttered switchgear to the dustbin, the V50 is as fresh as a Scandinavian spring morning.

Highlights include the well proportioned bodywork and free-floating centre console which first appeared in the S40. The 190cm wheelbase vastly improves legroom over the V40, and there's a more up-to-date diesel and petrol engine range to choose from.

Build quality was high in our SE model, and thanks to soft-touch plastics and comfortable seats as well as standard air-conditioning and electric windows, the V50 exudes a level of luxury comparable to cars such as Rover's 75 Estate and BMW's 3-Series Touring. It's a standard that UK drivers are coming to expect after the debut of the V70 and S60, but what is most impressive is the driving experience.

Based on the platform that will under-pin the forthcoming Ford Focus and is shared with the S40, the supple ride and electro-hydraulic power-steering make this, along with its sister car, one of the best driver's Volvos yet built.

The accurate steering and responsive chassis mean that this car simply glides through corners. Even when it's pushed hard, the V50 resists understeer and proves reassuringly neutral at the limit. The brakes are strong, and the ABS-backed system means that even on rough surfaces the car stops quickly and safely in an emergency. The driving experience is helped further by Volvo's DTSC traction control system, which keeps wheelspin in check when the road gets slippery.

And then there's the engine. We tried the new 136bhp 2.0-litre diesel, jointly developed by Volvo's parent company Ford and the Peugeot/Citroen PSA group. It's already impressed in the Jaguar X-Type, and continues to do so in the Volvo thanks to a blend of refinement and near instant throttle response. Volvo claims a 0-60mph time of 9.6 seconds and 131mph top speed, but it is the in-gear performance that really excels, feeling even stronger than the figures suggest. Fuel economy is good, too, at 49.6mpg.

But there is one criticism. In modernising the styling of the V50, Volvo has reduced the size of the boot and it is now smaller than it was in the V40. With the split/fold rear seats in position, the car offers 417 litres of space, which is less than premium rivals such as the X-Type.

Even with the seats folded, the car only provides 1,307 litres of useful stowage - 114 less than before. Seems like Britain's antique dealers will have to look elsewhere for transport... However, the news for the rest of us is much better. Not only is the V50 much better to look at than the V40, it's also light years ahead in terms of the driving experience. The cabin is more luxurious, too, which is certain to appeal to the upmarket buyers that the company seems intent on chasing.