We've been impressed by the new Volvo V60 D4 on UK roads, but is the cheaper D3 even better? We find out... 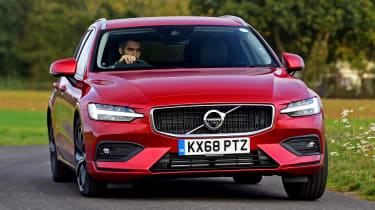 Given the choice, we’d step up to the punchier Volvo V60 D4, rather than opt for the D3 we’re testing here. It costs just £1,000 (or around £17/month) more, and comes with all the same kit – yet it’s faster and marginally more frugal. Whichever you choose, however, the V60 remains a fantastic family car.

Earlier this year, Volvo confirmed the new S60 saloon would not be sold with a diesel engine. The rules were different for its estate-bodied V60 sibling, however, which launched in the UK this summer with a choice of one petrol and two diesel powertrains.

We’ve already tried the excellent D4 on British roads, but now it’s the turn of the entry-level D3. It is almost 40bhp down – but matches its counterpart for kit and quality. In like-for-like Momentum Pro spec, it’ll save you £1,000 on list price, or around £17 per month on a three-year PCP finance deal.

But should you spend a little extra for the added punch of the D4? Well, on paper, it’s a much quicker car than the D3 we’re driving here. It’s two seconds faster from 0-62mph, and packs an extra 80Nm of torque. 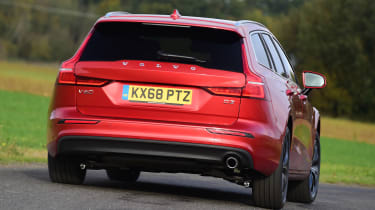 That said, in most situations the D3 feels every bit as quick as you’d want it to be. It picks up speed with purpose, and will happily sit at 70mph all day long. For some, however, the D4’s extra torque will be welcome; the lower-power car can feel a little lethargic when planting the throttle for a hurried overtake.

Loaded up, there’s a very real chance the D3 may feel a little underpowered, too, which is a concern for a car so focused on practicality. We tried it with four adults on board, but with a full boot that power deficit is sure to make itself known.

Yet everything else we love about the V60 remains intact. The D3 prioritises comfort over true dynamic quality, yet it’s all the better for it. Unlike its German rivals, there’s no pretention to the way it drives – so while it may roll a bit through the bends, it’s composed enough not feel unwieldy.

The softer suspension means it’s excellent on the motorway, and refinement is fantastic, too. So much so, there’s no way you’d know it was a diesel at a steady cruise; it’s an enormously relaxing car to drive. 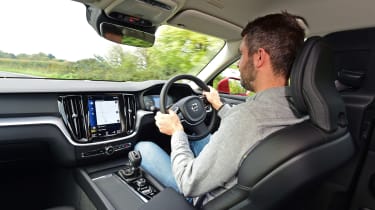 Practicality is excellent, and the 539-litre boot places the V60 close to the top of the class in terms of outright space. Fold the rear seats and the competitive 1,441-litre load bay pits it alongside Mercedes C-Class Estate and outgoing BMW 3 Series Touring. The glovebox is big, and there are various cubbies to store odds and ends.

Of course, being a Volvo, safety is paramount. Every version gets City Safety with Steering Support, Oncoming Lane Mitigation and Run-off Road Protection. LED headlights are standard, too, as is cruise control and rear parking sensors. Our car also had the Intellisafe Pro Pack, which adds the excellent Pilot Assist semi-autonomous drive features, Blind Spot monitoring and Cross Traffic Alert.