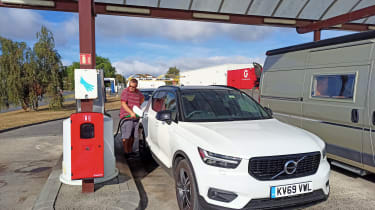 Despite an interesting approach to its energy-deployment strategy, I’ve realised there is a little more to the XC40 PHEV; that includes the smartphone tech that makes charging cheaper.

You will, by now, be used to Auto Express testers warning you about the sort of fuel economy you can achieve in a plug-in hybrid if you don’t, well, plug it in. This type of vehicle can save you huge bills on company car tax, but if you don’t actually give it electricity on a regular basis, it can quickly become just an inefficient petrol car.

This issue has been on my mind ever since I took delivery of our Volvo XC40 PHEV, not least because I have recent history of running pure-electric cars, with the resulting drop in fuel bills, and I’m keen to not see the costs leap back up again.

Sure enough, though, the XC40’s hybrid system has proved pretty rudimentary since it arrived. Yes, the car is good for a solid 22 miles on pure-electric power – maybe a little more if driven carefully. But on a longer run, it seems to be utterly desperate to use that battery power up; it appears to deploy this electric energy as quickly as possible and then spends the rest of the journey running on petrol. In an era when every inch of the road network is mapped, I’d expected something a little more intelligent.

Recently, though, I had the chance to push the car’s 1.5-litre, three-cylinder petrol engine-based powertrain properly beyond its suburban comfort zone, and then some. I took it to the south of Normandy, France, in fact, as the McIlroy family deserted the comfort of their front room for what seemed like their first holiday in ages.

The trip to the continent started true to form. As we drove from our home in Berkshire towards the Channel Tunnel, I was able to watch the Volvo’s battery meter heading steadily downwards. And by the time we’d reached the A3 turn-off of the M25, the cells were fully depleted, leaving the 70 miles to Dover, and a few hundred more to Mont St Michel, to be completed on petrol power alone.

As it turns out, though, things aren’t quite as simple as this. As the day progressed, and we made our way along France’s gloriously tolled (and traffic-free) autoroutes, I began to notice how the Volvo does indeed try to stick to electric power, even when the battery says there isn’t any available.

I started freewheeling down sweeping stretches of hillside, then trying hard to eke out the next mile or two on the energy that I’d regained through coasting.

Once we arrived at our campsite, we soon found the chalet had pretty much everything we needed bar an external power point, so the Volvo did the following seven days (and the journey back to the UK) without a top-up from mains electricity. 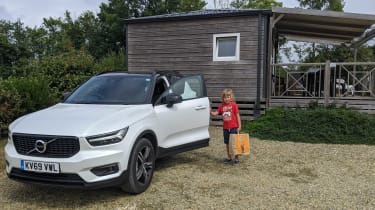 But here’s the thing: it managed the whole week while returning almost 45mpg, and I don’t think that’s such a bad figure. When you consider that the Volvo can do this but then spend the remaining 51 weeks of the year (or thereabouts) silently pootling around my local roads purely on electricity, it’s not that bad a trade-off. If anything, in fact, it shows just how efficient the XC40’s downsized petrol motor is.

Economy aside, I’ve recently managed to get my smartphone properly hooked up to Volvo’s onboard ecosystem, so I can now control key vehicle functions from the sofa (or anywhere with a data signal). It’s a worthwhile process because, although you can’t control the car’s charging timetable from the dashboard, you can via the app – and that means I can plug it in when I arrive home but, based on my location, schedule it to not actually start taking any electricity from the socket until the small hours.

That, in turn, helps to keep the electricity bill down, because my Octopus Go energy tariff has a special EV-friendly off-peak stint between 00:30 and 04:30, when it costs just 54 pence to top up the XC40’s 10.7kWh battery. That’s not a bad bill for 20-odd miles of motoring – and it helped to make the car’s long-distance efficiency on our trip to France all the more palatable. 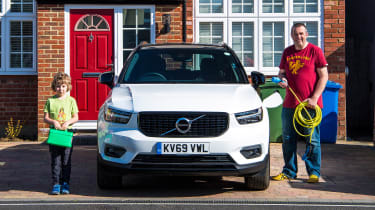 The plug-in hybrid Volvo XC40 T5 Recharge has got off to a strong start, thanks to life under lockdown

The world might seem like it’s being held in a freeze-frame at the moment, but when we do all emerge from lockdown, blinking into the sunlight, we’ll find the car industry in a period of real transition. We keep being told we’re going to have to go pure electric. But are we all ready for that?

The answer, of course, is no. And that, in theory, is where cars such as the latest arrival on our fleet come in. Because while I have plenty of experience running EVs, I’ve never tried an extended period in the ‘halfway house’ that’s supposed to help us move from petrol and diesel to that more advanced powertrain: a plug-in hybrid.

So here it is, the catchily named Volvo XC40 Recharge Plug-in Hybrid T5 FWD R-Design. A brief look at the specs shows the car’s tech is nearly as complex as its name. 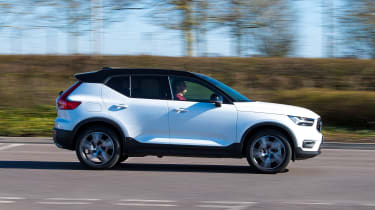 The Volvo has a 1.5-litre three-cylinder petrol engine that produces 177bhp and 265Nm of torque. Then there’s also an electric motor, which contributes 81bhp, and a 10.7kWh battery that can, in theory, power the car for up to 28 miles of zero-emissions running. It’s all transferred to the road via a seven-speed automatic gearbox and front-wheel drive.

Volvo is certainly on a roll at the moment, but on paper at least the XC40 looks ambitiously priced. The range starts from £25k, which is reasonable for such a funky premium SUV. But the Recharge carries a premium of £15,000 over the entry-level car. Our car’s options – a trio of bundles, plus a rear parking camera, a powered driving seat, the dramatic Lava Orange carpet and premium metallic paint – take that figure to a fairly eye-watering £44,840.

I’ve been a slave to fashion with the carpet and paint, I’ll admit (the floor lining was stunning on the original show cars from Volvo, so I’ve always wanted to put it to the test on an everyday basis). And I chose the Winter pack because the car was originally scheduled to turn up in February. But there are a couple of features that I’ve had to tick options boxes for that I think should come as standard.

The first is smartphone integration. Volvo’s portrait-layout infotainment system is decent enough (although no longer standout brilliant in a fast-moving market), but I’ll rely heavily on Android Auto to navigate the worst traffic when my regular commute to London restarts. In this day and age, on a car costing £40k, it’s laughable that Volvo charges £300 for this functionality (it comes as a pack with Apple CarPlay as well).

The second feature is powered child locks. To my mind at least, Volvo is still a brand with safety at its heart – so I’m surprised that this sort of family-friendly tech comes with an £85 charge. It’s small change amid the overall figure, though, and probably wouldn’t make a big difference on monthly payments or company car bills.

But all of this only makes sense – and delivers low running costs to the actual user beyond their company car tax bill – if you plug in the XC40 wherever possible. So that’s what I’ve been doing during lockdown, rendering the combustion engine completely irrelevant as we force the car into its EV mode for the weekly trip to the shops to pick up essential groceries. This has the added benefit of keeping me away from petrol pumps. 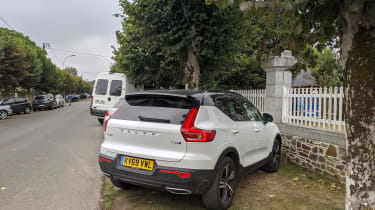 I have an Octopus Go tariff – a bit like Economy 7 but for cars – and if I chuck a full battery’s-worth of electricity in overnight, I have more than enough for all of my local journeys for just 53 pence.

On that basis, the XC40 is already working well, and the electric motor has just about enough shove to cope with the car’s increased weight when pulling away from traffic lights and junctions.

Of course, I’m keen for the lockdown restrictions to be lifted so I can start experimenting with the Volvo’s abilities over longer journeys – playing with the different modes to see which gives me the best efficiency over my commute. It can’t come quickly enough, in so many ways.

*Available options/packs have altered since we ordered our car.