There's a reason you can't visit a Volvo dealership and drive out in a new XC90. Huge demand means waiting lists are months long, and supplies are limited. 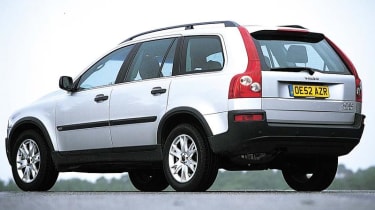 There's a reason you can't visit a Volvo dealership and drive out in a new XC90. Huge demand means waiting lists are months long, and supplies are limited. For those in the know, that's no surprise. In terms of road manners, it's the only premium SUV to challenge the BMW X5, while its practical seven-seat cabin is superb. It's versatile, too, with the rear bench folding into the floor, making it a viable MPV alternative. Under the strong-shouldered styling sits a wider and longer S80 platform. The four-wheel-drive system runs normally in front-drive mode, sending power to the rear axle when slip is detected. The XC90 is also one of the safest 4x4s, with sensors that detect and minimise the risk of rollover crashes and a front that cuts the damage caused to other road users in smashes. This is also one of the UK's slowest-depreciating cars, but values are beginning to soften. Now's your chance to beat the queues and save!Checklist * Exterior: chrome trim around side windows can work loose. Volvo has a fix for this, so if it has broken, your local main agent should repair it without charge. * Steering: poor steering lock, especially with larger optional alloys. Tyres are expensive to replace as they are unique to model, but tread wear isn't excessive for a 4x4. * Gearbox: early D5s only came as Geartronic autos - a manual arrived in 2004. T6 petrol only supplied with auto. Manuals are generally worth less on used market. * Boot: smaller people find loading up the boot tricky, due to the high floor and the fact the tailgate rises too high. Flip-up window is reported to squeak on the move. * Trim: all contain plenty of extras, but Executive models border on lavish. Very high list price means these variants suffer the worst depreciation. SE trim works out as the best compromise.Driving Impressions The XC90 is very refined, with little engine or wind noise, while the ride quality is commendable. Steering lacks feedback, but the car feels well balanced. T6 petrol engines provide lots of power, but poor economy, while the diesel is torquey, although there's a noticeable delay in response after pressing the throttle from rest.Glass's View Since its launch in June 2002, the Volvo XC90 has proved to be a massive hit with buyers. There are still waiting lists of up to six months for new examples, which means that used versions are extremely thin on the ground. Although resale values are levelling out, they are unlikely to fall significantly in the short term. D5 SE versions remain the most sought after, while demand for the T6 petrols is more limited due to the model's excessive running costs. Jeff Paterson, senior editor, Glass's GuideLife With An XC90 Until the XC90 came along, I had always thought Volvos were boring. But now, after 20,000 miles of trouble-free motoring, I'd never consider another car. David Blow, Gateshead, Tyne and Wear My XC90 has to tow a horsebox, and while it doesn't have the torque of the Land Rover Discovery it replaced, it's much more refined and relaxing on the long journeys between riding events. Jeanette Harper, Airdrie, Lanarkshire

With its strong shoulder line and bold lights, the XC90 is unmistakably a Volvo. Yet in terms of profile and size, it has much in common with its key rival, the BMW X5. However, the manufacturer is most proud of the car's seven-seat layout, which is an exceptional piece of design. Cabin space is nearly on a par with that of the Beemer, but the XC90 gains points for its superb seat comfort. It's also refined on the motorway, even if the ride is a touch fidgety.