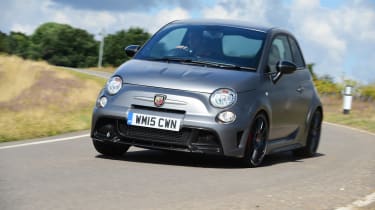 There's no denying the Biposto is a visceral, hardcore experience suitable for true Abarth nuts. The whole car is focused on performance and offers touring car thrills for the road. For that very reason, we would tick the box for the £8,500 dog box on the options list, even if it is an eye-watering amount of money to spend on what is essentially just a hot Fiat 500. Yet there’s nothing sensible about the Biposto, and it isn’t a logical purchase anyway.

With Abarth’s version of the upcoming Fiat 124 Spider not arriving for at least another year, the 695 Biposto remains the hottest car to wear the scorpion badge.

We drove the bonkers 695 in 2014 fitted with every single extra from the options list, including the five-speed ‘dog box’ (an all-aluminium H-pattern gearbox, allowing brutal, clutchless gearchanges) – an £8,500 highlight on a car nudging £50,000. It made for a grin-inducing package, but can the standard car with a conventional five-speed manual gearbox replicate those thrills? 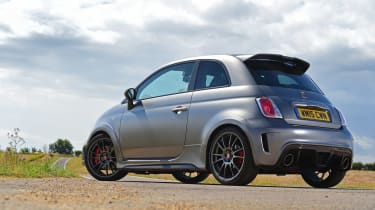 The first point to mention is that the Abarth 500’s regular manual gearbox isn’t the best in the business. While the dog box is positioned close to floor, the standard version comes out of the dash just like in other Fiat 500 and Panda models. Plus, it doesn’t have quite the same smooth operation as a six-speed you’d find in a MINI, with an annoying notchiness between ratios.

The thick, leather-wrapped gearlever doesn’t feel that pleasant in the palm of your hand, either, but there’s no doubting the fact that the standard set-up is far easier to live with than the dog box, which is only really suitable for track day enthusiasts. 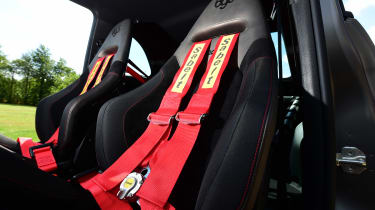 On the road, the Biposto is compromised - but slide into the carbon-fibre-shelled Sabelt seats, clip the four-point seatbelts together (part of the £3,700 Track Kit) and turn the key, and you’ll rocket down the road.

The Biposto has the same 1.4-litre turbo from the regular 133bhp Abarth 500, yet with power tweaked to 187bhp and the car weighing just 997kg (around 400kg less than other 500s), straight-line acceleration is startling. The sprint from 0-62mph takes just 5.9 seconds, while it tops out at 140mph.

The steering is accurate in bends, although the hydraulic shocks and racing springs give a bouncy ride. Undulations and potholes are dealt with fiercely with little respite, but find a smooth surface, and the Biposto handles like a tiny touring car. 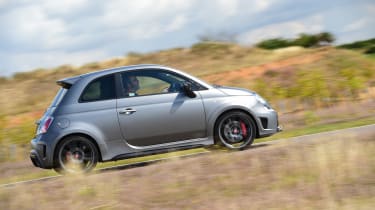 It’s decked out like a racing car inside, too – a three-bar roll cage and Akrapovic sports exhaust are standard kit, and our test car turned things up a notch with a £3,700 Carbon Kit, which includes carbon-fibre dash and door cards.

However, with handling this good, the dog box is a must – even if it is a costly extra. It would be our choice over the standard box all day long.