Fiat says the Abarth 695 Biposto is the world's smallest supercar. It has the performance but price is right too 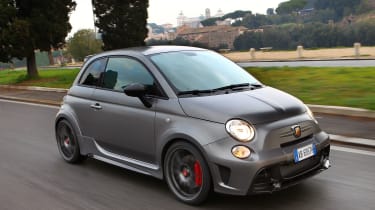 It’s got a great soundtrack, blistering acceleration and fun handling so there’s no doubt the Abarth 695 Biposto is a great car out on the track. It’s certainly easy to love and holds up well on public roads, too, with suspension soft enough to ride over uneven surfaces. However, the dog-ring gearbox won’t be for everyone. It’s an expensive option that highlights the Biposto’s biggest drawback– the prohibitive cost of fitting all the added extras that make it special.

It’s hard not to get out of Abarth’s quickest and craziest creation yet without a broad smile on your face. The brand’s ‘halo’ car, the 695 Biposto, is being pitched as the world’s smallest supercar and it’s easy to see why.

From the moment you strap yourself into the racing seats complete with four-point harnesses, you feel like you’re ready to race. Floor the throttle and the twin active-valve exhausts howl into life while the turbo kicks in.

A flick of the beautifully designed H-pattern gearbox with dog rings will instantly nudge you into the next gear and before you know it there’s a corner approaching. Turn in and the traction control gives you just enough to play with before saving you from an embarrassing trip off the track. 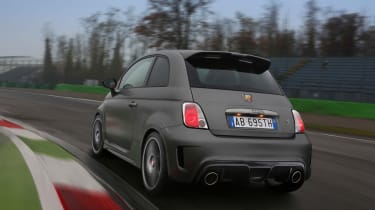 Between corners the Biposto feels planted while the sound and sensation of the fast acceleration is both thrilling and addictive. It’ll race from 0-62mph in 5.9 seconds with a top speed of 143 mph. That’s serious pace in a city car and it’s hardly surprising when you learn that the 1.4-litre turbocharged engine under the bonnet has come straight from the Formula 4 single-seater series.

With the Biposto though, it’s not all about outright pace. You can have just as much fun flicking through the bends and finding the limits. It’s agile and nimble and doesn’t feel top-heavy like the Fiat 500 donor car sometimes can. That’s partly because it weighs just 997kg with the back seats stripped out and replaced with a roll cage. Further weight saving comes from the removal of the xenon headlights, fog lights, air-con and even the radio.

Its party trick is undoubtedly the gearbox. It’s no exaggeration to say it’s a work of art in its own right with the inner workings gloriously exposed by polished red metal. This is great when you’re stationary, but take a quick glance down at speed, and you’re struck with sudden panic that you’ve put it in the wrong gear due to the inverted internal workings. 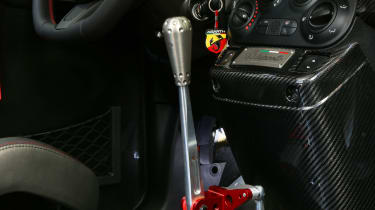 The gear changes can be done without using the clutch, although that’s probably best left to racing drivers otherwise the shifts can become quite brutal. Even with the clutch, gear changes are lightning quick and if you get one spot on it’s a great feeling. Get one wrong or miss one – which is more common – and things get rough.

The biggest drawback for this party peice gearbox is the cost. If you want the unique set-up, it’s an extra £8,500 – a quarter of the list price. Abarth fans and hardcore racers will get the benefit but we found the normal ‘box to be just as fun on the track and much more practical for everyday use.

So, out on track the Biposto unsurprisingly shines but what about on the road? The simple answer is it’s pretty good. The suspension isn’t too firm and rides over bumps fairly comfortably. Assisted by 18-inch rims and a wider track, you can attack country lanes with confidence. The 250Nm of torque delivers across the range and even at lower speed limits the exhaust is still a joy. 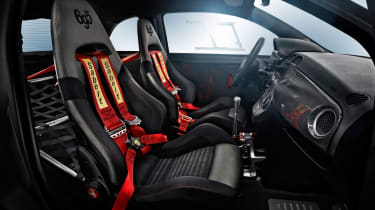 The biggest stumbling block for the Biposto is that it’s essentially an expensive toy. And while it starts at £32,955, to get top spec you’ll be forking out £50k. Options include polycarbonate windows for £1,775, a track kit with racing dash and helmet for £3,700, a carbon styling kit for £3,700 and a ‘124 Speciale’ pack – which features an aluminum bonnet and titanium bits – for £2,990. For those with money to burn who like personalisation, the fact it’s only available in matte grey may be disappointing.