New Abarth 595 Competizione feels dated compared to rivals, but they can't compete with its character

Essentially the new 595 carries over some of the updates from the facelifted Fiat 500 which launched 12 months ago, but it now feels like a proper little performance car and no longer like a Fiat 500 with an Abarth badge stuck on. However, it’s still expensive and is beginning to feel dated compared to other small hatchbacks, but it certainly doesn’t lack character.

While the world was pouring adoration over the impossibly retro Fiat 500 in 2007, the newly reinvigorated tuning firm Abarth was readying its version. It was an instant hit and over the years new versions of the Abarth 500 came along with more power and more crazy bodywork. It’s the small hatchback’s success that has paved the way for the Abarth 124 Spider, so it only seems right that it gets an upgrade itself. And this is our first taste of it – the new Abarth 595.

The first thing to mention, though, is while the 124 Spider is the first example of Abarth exploring cars other than hatchbacks, the new 595’s arrival is hardly surprising. Around 12 months ago Fiat facelifted the 500 to keep it looking fresh despite its advancing years, and we knew Abarth would be getting its hands on it eventually. 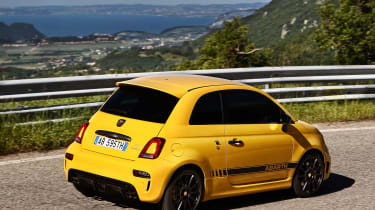 So, the new interior upgrades won’t come as much of a shock. The biggest improvement is the addition of an infotainment screen – Fiat’s Uconnect system to be precise, and it’s accessible through a five-inch screen or in seven-inch display as an option. Go for the larger screen and there’s sat-nav, DAB and Apple CarPlay and Android Auto phone compatibility. A Beats audio system is also available, and there’s a new flat-bottomed steering wheel and dashboard inserts to brighten up the already distinctive cabin.

On the outside, the dinky 500 body looks more assertive than ever thanks to a new front bumper with large air intakes and a redesigned rear bumper featuring new vents. There are also new 17-inch alloy wheels that are lighter than before, while range-topping Competizione models come with a Monza sports exhaust system with four tailpipes. But a facelift wouldn’t be complete without new halo-like daytime-running lights – just like those on Fiat’s 500.

Along with a welcome dose of modernity, Abarth has taken the opportunity to add a little more firepower, too. The entry-level 595 now musters 143bhp from the 1.4-litre turbo petrol (up 5bhp from before), the 595 Turismo gets an extra 4bhp with 163bhp but the Competizione still packs 178bhp and features stiff Koni shock absorbers. 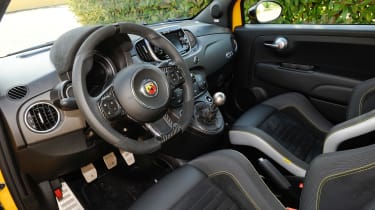 On the road, very little has changed which is both a good thing and a bad thing. The range-topping Competizione model is a full-on experience – the accurate steering and snappy five-speed gearbox are fantastic, and when mated to a short, firmly-sprung chassis it makes for lightening fast turns of direction. This latest 595 is proof that Abarth is moving away from its Fiat sister company as this car no longer feels like a Fiat 500 with an Abarth badge glued on the nose.

However, you still sit a little too high. Our Competizione’s fantastic looking and surprisingly supportive Sabelt bucket seats making you feel like you’re sitting on the car rather than in it. The ride, while fine on the right road, is still very firm, plus the noise – deep bowled on acceleration with pops on overrun – can get a little tiring as even when you’re taking it easy it’s loud. But this is a feisty hot hatch, so we’d expect nothing less.

As time has marched on, the car’s original rival the MINI has grown up in more ways than one; the way it drives and feels being two obvious areas, which make it a better all-rounder. But the MINI cannot compete with the 595’s character. It may feel a little old and uncompromising but there’s an irrational desire to own one every time you slip behind the wheel. It’s mad, ridiculous but completely loveable.