The Abarth 695 70th Anniversario marks 70 years since the firm was founded, but is it the ultimate Abarth? 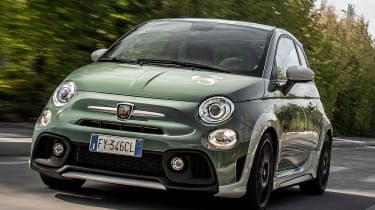 The automotive world is a richer place thanks to cars like the Abarth 695 70th Anniversario special edition. Exciting, characterful and flawed in equal measure, it’s an expensive and outdated yet genuinely appealing hot hatchback. It’ll be too compromised for some, but if you’re an ‘Abarthisti’ who can’t get enough of these quick, wicked little cars, the 70th Anniversario more than justifies its existence on the 695’s greatest hits album, and is a fitting tribute to a car that has outlasted almost every other model on the market.

Nobody would straighten the leaning tower of Pisa to make it a ‘better’ building, and suggesting that the Abarth 695 would be improved if its faults and quirks were remedied would be missing the point to a similar extent. Make no mistake: this is a flawed car, but it’s one that wears its heart on its sleeve, offering more personality than many vehicles could dream of.

But before anything else, the Abarth 695 70th Anniversario’s price needs to be addressed. As near as makes no odds £30,000, there are a number of faster, larger, more technically competent models you could have instead. A Hyundai i30 N, a Volkswagen Golf GTI or a Ford Fiesta ST all fall within this price bracket; you could even buy two VW up! GTIs or a serviceable used Porsche 911 for this sort of outlay. 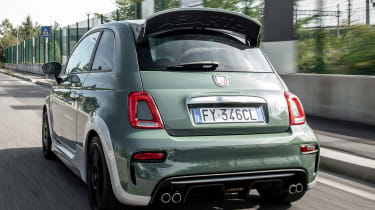 It’s also worth mentioning that you can get an identically powerful 595 Esseesse (the 695 name is reserved for ‘special’ models), complete with a limited-slip differential and Akrapovič exhaust, for around £4,000 less. But the 70th Anniversario sells itself on an emotional, rather than rational level.

Away from the price, the 695 70th Anniversario has two standout features: a boot-mounted, manually adjustable, 12-position spoiler that reduces lift and sets the rear off with a dash of rally-car flair. There’s a two-tone “Monza 1958” paint job, (a tribute to the first 500 Abarth - though four other two-tone colours are offered), too.

The Sabelt seats feel perfect. You can’t easily adjust them on the move, and the seating position feels high, but the perched posture you adopt actually suits the 695, making you feel like you’re holding on to the car as it drags you along by the scruff of your neck. And the seats themselves hug and comfort in equal, well-judged measure – though taller drivers may find their knee fouls the centre console.

The silver flecked dash panel looks special enough but feels tinny to the touch, while we question why the ‘500’ logo in front of the passenger hasn’t been changed for a 695 badge. Still, Abarth clearly hasn’t scrimped on the seats, the Alcantara and leather steering wheel, or the aluminium gearlever; as major touchpoints, we’d say that’s money well spent.

Turn the key and the 1.4-litre four-cylinder engine puts a burbly if slightly subdued note through those four exhaust pipes, though things liven up when you press the ‘Sport’ button, and become livelier still when the throttle is blipped. The 177bhp 1.4-litre engine is boostier than more modern turbocharged petrols, needing to be kept above 3,000rpm to maintain momentum, though acceleration is fairly urgent when it’s on-song, with 0-62mph taking 6.7 seconds. 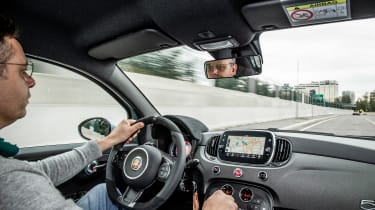 Keeping the engine at optimum revs is no hardship, because the five-speed manual gearbox is a pleasure to use. It’s down a ratio and less precise compared to an up! GTI’s transmission, but grab the 695’s aluminium shifter firmly and bang the gears in assertively and you’ll find it deeply satisfying. Just make sure you avoid the optional five-speed robotised automatic - we’ve tried this in other Abarths, and it feels like it’s from another era.

The ride is something of a mixed bag. Firm and well-controlled on most surfaces, it deals with poor-quality tarmac pretty well. Larger potholes and speed bumps need to be approached with caution, though, with the 695 uncomfortably hitting its bump stops all too easily.

It’s on tight, twisty roads that the 695 really shines. There’s not a huge amount in the way of steering feel, but the tiny wheelbase means small inputs faithfully and quickly translate into directional changes, while the need to work the gearbox and keep the revs high mean spirited driving is never anything less than engaging. 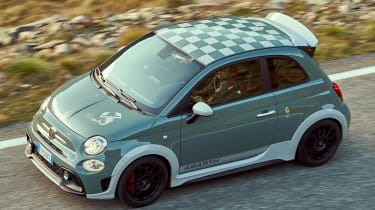 Pushing too hard mid-turn brings understeer, though this arrives predictably. A tendency to torque steer is less welcome, as is the fact the traction control can’t be turned off, with electronics limiting acceleration when pushing hard out of a corner. The Brembo brakes are strong, though: they’re effective, easy to modulate, and resistant to fade. Wind noise on the motorway is noticeable but acceptable, and the 695 feels more planted than you might expect at cruising speed.

Anyone who buys a 695 70th Anniversario will find tunnels their friend, with the quad exhaust system and Sport mode turning the Abarth into a proper little screamer under full throttle. In larger, faster hot hatches, planting your foot to the floor quickly gets you to the legal limit, but the 695 feels alive in your hands even at relatively modest speeds.

The clear limitations present in the 695 70th Anniversario both dent its appeal and add to its character. Even if newer, more powerful and spacious hot hatchbacks, as well as cheaper but equally powerful Abarths, mean it’s almost impossible to recommend on any rational level.