The new Abarth 595 Esseesse is the brand's latest version of the popular hot hatch, but is it the best yet? 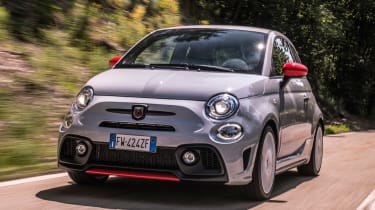 A hot hatch that trades heavily on its uniqueness, it's hard to recommend the Abarth 595 Esseesse to buyers wanting the most bang for their buck or a fast small car that'll be easy to live with. It's impossible to dispute its lack of character though, and on the right road it's riotous, fun and frustrating in equal measure, being a car you either ‘get’ or can't wait to get away from.

We’ll forgive you for not knowing just how many hot versions of the Fiat 500 have come to fruition since the arrival of the Abarth 500 in 2008, but here’s another one to add to the list: the new Abarth 595 Esseesse, which arrives essentially as a fully specced up version of the 595 Competizione with one or two bespoke ingredients.

The Esseesse returns to the fold as a part of Abarth’s 70th anniversary celebrations - you can’t really miss the badges pointing that out. The basic recipe is unchanged though, meaning a familiar and feisty 178bhp 1.4-litre turbocharged four-cylinder engine sits up front, sending its power to the front wheels via a five-speed manual gearbox. 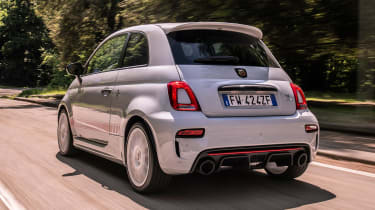 Climb aboard the 595 Esseesse and the first thing you’ll notice are those new leather trimmed Sabelt bucket seats. In the confines of the Abarth’s tiny cabin they are simply enormous, only just fitting widthways. But they’re all part of the show, they look and feel the part and blend nicely with the carbon fibre dashboard, the carbon/Alcantara trimmed steering wheel and the huge, easy to read instrumentation. As a range topping member of the 595 line-up the Esseesse is fitted with Fiat’s seven-inch touchscreen infotainment unit as standard, and while not the best in the business it works nicely, but the plastics elsewhere in the cabin still hint at the car’s humble and cheap beginnings.

Few of those willing to part with over £25,000 for a fast 500 will care though, and that’s really not what this car is about. Fun is the Abarth 595 Esseesse’s brief, and it takes an uncompromising approach to fulfilling this.

As snug and cosseting as those Sabelt seats are, the driving position remains a mixed bag. The wheel is lovely to grip but lacks reach adjustment, and the seats don’t do height adjustment either. You sit fairly high, almost standing on top of the pedals. The gear lever is positioned nice and closely to the wheel, and is topped with a straightforward and refreshing metal ball.

Get on the move and immediately you’ll unearth an unflinching firmness to the Koni suspension at sane speeds. The 595 remains a rock hard little car, with a level of stiffness you simply won’t come near in any of its more composed, less expensive rivals. It’s not overly crashy, but on less than perfect tarmac in town it jiggles endlessly.

Frankly, this is a car that only makes true sense in one scenario: a twisty, flowing, empty road. Find one to throw the 595 Esseesse down and soon the sum of its parts begin to make much more sense. 178bhp and 250Nm is by no means a big amount in a hot small car these days, but the small scale of the 595 and its relative lack of weight means it makes the most of that figure. 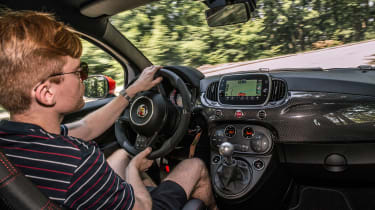 Importantly, the engine delivering those numbers is still so utterly rich in character. It’s an old-school, boosty turbo four-pot that delivers its power in the middle of the rev-band and in somewhat unsophisticated clumps. You have to manage the revs to keep it in the sweet spot, and the five-speed gearbox is far from the finest you’ll find in a hot hatch, but it rewards with a raucous soundtrack. It’s hard to believe something so small and cute in appearance can snarl and bark quite like the 595 Esseesse does, and it only encourages you to prod the right pedal more and more.

The new active exhaust from Akrapovic doesn’t really pop and crackle on the overrun, but it unearths a powerful note on throttle and on full boost. It convinces you to keep your foot on the throttle for as long as possible, so thankfully, those Brembos up front provide the little Abarth with more than adequate stopping power. You can step hard on the middle pedal at a moment’s notice and squirm things to a halt quickly.

Throw some corners at it and you’ll discover that the 595 Essesse’s steering, while nicely accurate, is a little uninspiring. It’s too light with the car in its normal baseline setting. Toggle the Sports switch and bring the exhaust into play (we recommend you do), and some artificial heft arrives. At least this is a highly readable car. Grip levels aren’t astonishing, but it’s very easy to read when the front axle will unstick from the tarmac and wash out wide, and given the scant weight it’s easy to row back a little and tuck the nose back in on line. That’s said, you’d struggle to detect the limited slip differential up front at work.

Still, if you’re simply in the market for a small, fun, fast car the Ford Fiesta ST is better in almost every parameter and cheaper, and objectively it’ll be a better purchase and better to live with day to day. For the money you’ll spend on the 595 Esseesse, you could probably have our favourite hot supermini with every conceivable option fitted. The Esseesee is an emotional, not rational purchase and it exudes a distinctive, undeniable charm that will only get under the skin of the few, not the many.