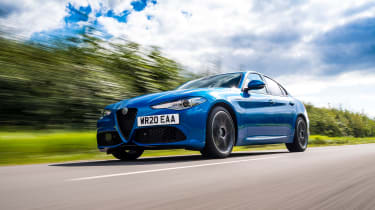 The new technology updates and additional equipment make the Giulia more competitive, but in Veloce trim it’s still the way in which the Alfa Romeo drives and handles that makes it one of the best compact executive saloons on the market – and a worthwhile alternative to its more subdued German rivals. If you value involvement in the sub-super-saloon sector, the Giulia Veloce is now an even better proposition than before.

A few years after Alfa Romeo launched its excellent Giulia compact executive saloon, BMW brought out an all-new 3 Series that was as dynamic as ever but offered more comfort and refinement, as well as a lot more technology. While the two cars’ model cycles are offset by a few years, it hasn’t stopped Alfa updating its handsome four-door to keep it competitive against some of the best in the business, including that BMW, the Mercedes C-Class, Audi’s A4 and the Jaguar XE. All are great cars.

The Alfa always had dynamic ability on its side – we’ll come to that in a moment – but what it lacked was the tech to rival its competitors. So for this MY20 car, the brand has improved its infotainment, with the addition of Apple CarPlay and Android Auto as well as a new 8.8-inch touchscreen display. This is also controlled by a new rotary wheel on the transmission tunnel.

There are also more driver-assistance systems, an improvement in material quality and a tweaked interior layout. These changes are subtle, while Alfa has also shaken up the trim structure, even though this Veloce is still the top-spec car, Quadrifoglio super-saloon notwithstanding.

The Veloce badge indicates that this Giulia boasts a 276bhp 2.0-litre four-cylinder turbocharged petrol engine, sending power to the rear wheels through an eight-speed automatic gearbox. It’s a real ‘Alfa’ motor, too, meaning the throttle response is sharp, it revs with a lovely rasp and there’s a solid level of performance. The car comes alive as the revs rise, with the 0-62mph sprint dispatched in 5.7 seconds.

Not that you need to work it especially hard. With 400Nm of torque from 1,750rpm, teamed with a transmission that keeps you (mostly) in the right ratio and shifts quickly and smoothly enough, there’s plenty of easy acceleration on offer. In manual mode the changes are a little jerky, but in fact this adds a bit of personality. 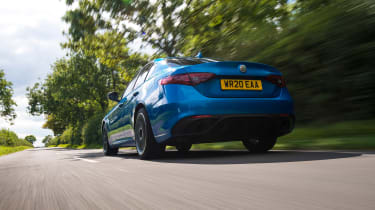 Thanks to aluminium components for the double-wishbone front suspension, a multi-link rear axle and superbly precise but quick steering, the Alfa Romeo handles as well as it ever has, too.

The turn-in response might catch you by surprise through the first few corners, but once you get used to the rate at which the car’s beautifully styled nose points towards apexes, the lack of steering input needed to scythe through a set of bends feels very rewarding. No other compact executive saloon drives or handles like this.

Body control is good. You can add adaptive dampers as part of a £1,650 pack that also brings a limited-slip diff, but it’s not necessary. The Giulia offers plenty of control over its acceptable 1,429kg weight, yet it doesn’t compromise comfort too much. You’re more in tune with how the car is reacting to the road beneath you, but it isolates you just enough to be comfortable and refined on a long journey – and, as a Veloce, involving on twisting roads. 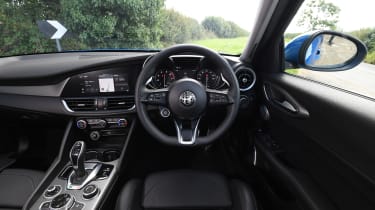 The new infotainment makes the car easier to live with as well. It’s more responsive, if still not the best in its class compared with the BMW’s stellar system, yet the phone-connectivity packages give you more options. Cabin quality is improved, but it doesn’t feel as premium or as well built as an A4’s. However, there are some nice styling touches to remind you this is a more individual choice – the monochrome Alfa logo on the steering wheel and the tricolore Italian flag next to the gearlever stand out particularly.

The updated driver-assistance systems aren’t anything new for the class, but at least they put the Giulia on a level playing field with its rivals. Lane-keep and active blind-spot assist, adaptive cruise, traffic-jam assist that will steer to keep you in your lane and a driver-attention monitor are all available.

As a high-spec trim Veloce models get plenty of standard kit, including sat-nav, adaptive cruise and climate control, AEB, all-round parking sensors with a rear-view camera, heated leather sports seats, wireless charging, upgraded brakes and smart 18-inch alloy wheels – although our car came with £995 optional 19-inch rims. It rounds off a nice package that has plenty of personality.