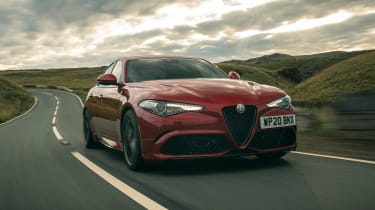 Several years after its launch, the Giulia Quadrifoglio remains one of the most thrilling super saloons on sale today. The driving experience is just as exhilarating as before, but minor tweaks for 2020 have improved the Gulia as an everyday package. The revised infotainment still isn’t perfect, but it’s an easy flaw to forgive. The next BMW M3 will have to be good to beat it.

This is the 2020 Alfa Romeo Giulia Quadrifoglio, and it couldn’t have come at a better time.

Since its launch it has provided the sternest competition for what is, to many, the super saloon king: the BMW M3. Indeed, until BMW’s M-division really got its heads down and released the CS version of its last hot compact exec, the Alfa was arguably the superior driver’s car.

For now, we’re in limbo while we wait for BMW’s next instalment. But the meantime, Alfa Romeo has made an already brilliant performance car even better.

Cosmetically, the 2020 Quadrifoglio’s updates mirror those of the rest of the updated Giulia line-up. The exterior look is pretty much the same as before save for new full-LED tail lights around the back, while the badging and other exterior trim is treated with a darker finish.

A new range of colours are offered, too; red, green and bold ochre (golden yellow for the less initiated) options all hark back to beautiful classics from Alfa’s past - the 6C, Montreal and GT Junior respectively. The brake calipers can now be painted anodised or gloss black, alongside red or yellow tints. 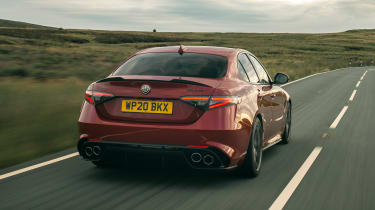 While there’s a retro theme to the colour palette, the driving experience remains bang up to date. The centrepiece is the engine: a 2.9-litre twin-turbocharged V6 with 503bhp and 600Nm of torque. At any speed and any gear, performance is devastating. 0-62mph dips under four seconds and, without a 155mph electronic limiter as found in its German rivals, it blasts them aside on the way to its 191mph top speed.

The angry engine note encourages you to make the most of every last rev - something that the Ferrari-developed unit relishes. If you want even more of that snarl to make it into the cabin, an Akrapovic exhaust system is a £3,250 option. It’s slightly lighter than the standard system, too.

The one gearbox choice comes in the shape of an eight-speed ZF automatic gearbox. It’s a great match overall, shifting quickly when needed (a process made all the more enjoyable by lovely aluminium steering wheel-mounted paddles) and smoothly when not. It can be prone to occasional jerkiness at low speed, though.

While it’s easy to let the engine dominate the driving experience, it’s the Giulia’s chassis, and its uncanny ability to make a 500bhp-plus rear-driven layout feel so accessible, that is arguably the highlight. The rear can become unstuck if provoked, but for the most part, traction is immense.

The steering is very quick by the standards of most rivals, but the rate of response is brilliantly matched to a chassis which turns in more keenly and confidently than any other sports saloon. Its weighting and precision are spot on, too. By the standards of most rivals, the Giulia is light, and it really feels it: quick direction changes leave it unflustered, mid-corner bumps don’t phase it, and body roll is well contained. 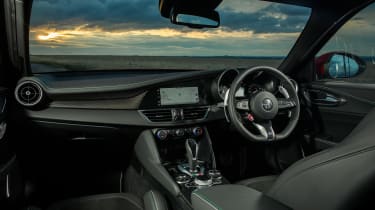 Adaptive dampers let the driver choose between either sporty or a more forgiving tune for the suspension, and while the firmer of the two gives the ultimate sharpness without ever feeling harsh, the ride quality of the softer setting is truly remarkable. It rounds off nasty edges and severe bumps better than any rival, but barely loses any cornering composure compared to the sport setting. It’s almost as if it was developed specifically for UK roads.

And that comfort is now backed up by a mild improvement in overall refinement compared to the outgoing car. Alfa Romeo has focussed on reducing noise, vibration and harshness throughout the cabin, so it is a better four-door GT than ever.

Elsewhere the driving experience is just the same. The brake caliper colours may have changed, but the stopping power remains just as strong. Carbon ceramic discs are available, but we’d save £5,500 and stick with the steel discs; the former might be stronger for repeated track use, but they are annoyingly grabby at low speeds.

Inside, Alfa Romeo has looked to address two of the biggest negatives about the previous car: quality and tech. The first is addressed by a new centre console. Gone are the old cheap feeling plastic gear selector and surround, replaced by a new leather item with carbon fibre trim. It’s integrated into a console with cupholders that have moved further back.

The new infotainment system now incorporates touchscreen tech for the first time. This has allowed for a tablet-like tile layout for the main menu, making icons for each of the main functions much larger than before. Quadrifoglio-specific performance menus allow the driver to measure acceleration, power and torque usage, turbo pressure and component temperatures in real time.

Beyond the optional carbon discs and Akrapovic exhaust, drivers can spice up the Giulia with a range of options. Highlights include red or green seatbelts, lightweight Sparco front seats, and a carbon fibre roof.

Finding negatives is genuinely tricky. Even though that infotainment system is an improvement on what the Giulia had before, it’s still slow and laggy compared to the best that BMW has to offer. But that’s about it, especially when considering the fact that, at £67,195 before options, it undercuts the Mercedes-AMG C63 by almost £10,000.