Efficient diesel engines will be the biggest sellers in the UK 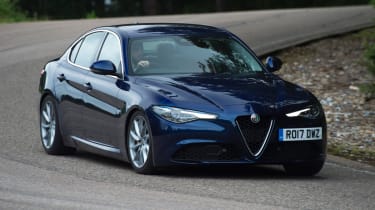 Prices for the Alfa Romeo Giulia start from just over £33,000 and rise to around £46,000 for the regular range, while the high-performance Quadrifoglio weighs in at a hefty £64,900. That means the highest-spec versions of the Giulia are subject to a premium that bumps up road tax to £465 for the first five years that you pay it.

Everyday running costs are fair, and the latest WLTP test has shown the Giulia in a better light than some of its rivals. The lower powered 160hp diesel has fuel economy of up to 53.3mpg and emissions of 128g/km, while the 190hp diesel isn't far behind at 52.3mpg an an identical 128g/km - so it's only the car's higher price that's a drawback. However, when we tested the more powerful diesel, we recorded a disappointing 35.1mpg at the pumps. That did include some harder driving, and you're more likely to get close to the claimed WLTP figures than the older NEDC test, which claimed figures of around 63mpg for these two engines. 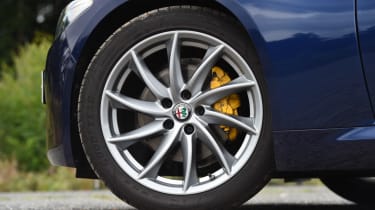 The petrol Giulia’s figures start at 36.2mpg for the 200hp engine, which is around 10mpg poorer than the old NEDC test, but again, more achievable in the real world. Emissions are rated from 153g/km. The faster Veloce models have quoted economy of up to 33.6mpg, and when we ran one as a long-termer, we achieved 33mpg during our time with the car.

In contrast, the Giulia Quadrifoglio isn’t exactly economical, and won't be if you decide to use all of its performance. Quoted economy is 27.2mpg and emissions are 206g/km, although those figures are the best you'll get from a Ferrari fettled motor with more than 500bhp.

To help ease the cost of regular maintenance, pre-paid maintenance packs are available when you buy the car.

The Alfa Romeo Giulia’s insurance groups look pretty good, with the lowest-rated models in Group 24. The Veloce sits in group 34 (or group 36 for the carbon-clad Veloce TI), and as you would expect, the Quadrifoglio version is the highest of the lot in group 46.

The initial desirability of the Alfa Romeo Giulia has worn off, and it currently sits in the region of 39-41 per cent for residual values after three years/36,000 miles. The Quadrifoglio is clearly in demand, though, with a higher retained value of around 45 per cent. These figures are similar to the Jaguar XE and Mercedes C-Class, but the Audi A4 and BMW 3 Series perform better.