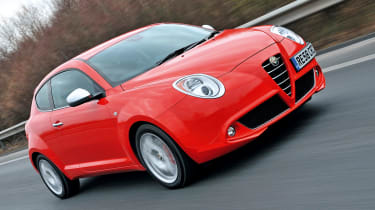 The larger of the two diesel engines is a strong performer, although it could be smoother at start-up and under hard acceleration. Despite adding some extra weight, it still feels nimble to drive and proves a lot of fun, especially in Dynamic mode, where the throttle response is razor sharp. Alfa has combined oil-burning fuel economy with excellent build quality and classic Italian design.

The Alfa MiTo is a hit with a petrol engine – so now it’s time to see what the diesels can do. This week, we’ve driven the flagship 1.6-litre oil-burner.

It produces 120bhp and 320Nm, which is 10bhp and 80Nm more than the MINI Cooper D. Although the unit is noisy, it offers a satisfying burst of acceleration – even from low speeds. And there’s good news at the pumps, too, with a claimed 58.9mpg.

Standard kit includes the firm’s three-stage DNA system, which allows you to choose between Dynamic, Normal and All-weather modes. The last of these adjusts the traction control to deal with slippery surfaces – something we had the chancy to try out on our snowy test route – and it proved extremely effective.

Normal is for urban driving, while Dynamic mode gives the steering more weight, prevents the traction control from cutting in too early and sharpens

throttle response – making it feel much quicker than 0-60mph in 9.9 seconds would suggest. But it’s the price that really sets it apart. The range starts at £10,745, undercutting the cheapest MINI by more than £1,500, and even base-spec Turismo models have alloys, air-con and an MP3 stereo.

Rival: BMW 1-Series THE entry-level BMW offers rear-wheel-drive thrills, and EfficientDynamics maximises economy. But it’s not as desirable and much more expensive.