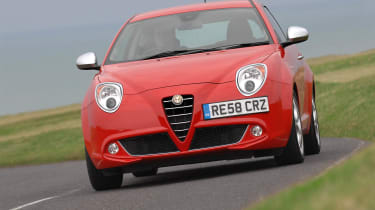 Styling/image There’s been a surge of models into this class recently, such as the BMW 1-Series, although the Fiat Grande Punto and Renault Clio are closer on price.  However, the Alfa is cool, offering curvy lines and a funky profile. The Italian brand’s appeal remains strong, too – but as strong as the MINI’s? We’ll have to wait and see.Interior/practicality After shaping the outside like a condensed 8C Competizione, the designers haven’t quite let rip in the cabin. It’s a little sombre and the back is decidedly short on space. But buyers aren’t looking for a practical car -  they want a sporty little head-turner, and that’s what Alfa has delivered.Engine/performance Under the platform, shared with the Grande Punto, the MiTo has less bodyroll and an improved ride due to its sharper suspension. And with this car, Alfa has launched the DNA system which enables drivers to switch between modes – Dynamic, Normal and All weather – to suit conditions.  And with the 120bhp 1.6-litre diesel engine on board, the MiTo is slightly more powerful and torquey than its petrol counterpart, while returning 58.9mpg on the combined cycle. Most importantly, it’s excellent fun.Ownership costs Residual values are not quite as strong as the MINI’s. The MiTo can’t compete with the British-built car’s service fees, either. Yet in its favour, the oil-burner costs £14,995 which is keen compared with rivals, and those fuel returns beat its arch-rival’s 52mpg combined figure. Insurance is in group six, and VED is Band D.Safety/environment A five-star adult protection Euro NCAP rating can’t be sniffed at. Driver, passenger and front side airbags are all standard. Pushing out 126g/km of CO2, the MiTo doesn’t do as well as the MINI’s 104g/km on emissions, though.Model variants and specifications Alfa MiTo 1.6 JTDm Lusso £14,045