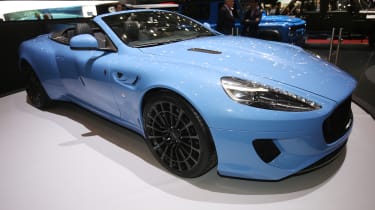 British design house Khan is back at the Geneva Motor Show in 2017 with another Aston Martin DB9 based supercar – a convertible version of the WB12 Vengeance coupe revealed at the show last year.

It recieves few design alterations – lack of fixed roof aside – compared to last year’s coupe. The same ‘roulette’ style alloy wheels are fitted, alongside the old-school rounded taillights. A revised front grille with a wider, more agressive front apron gives the Vengeance a distinctive face compared to its DB9 donor car, while there's a new rear apron at the back too. 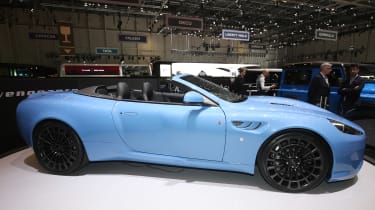 Inside, the seats have been upholstered in fluted black leather, while the door tops and centre armrest also get the fluting treatment.

According to Kahn boss Afzal Kahn, “Creating a convertible version of the Vengeance posed some challenges, given the unique coach built nature of the vehicle, but we’ve overcome them in true British fashion.”

Kahn says that despite the Vengeance Volante’s DB9 underpinnings, the car takes design inspiration from the original Aston Martin Vanquish as well as Astons of the 1980’s and 1990s. There's certainly a hint of DB7 Zagato in the car's rear, with its two circular taillights. 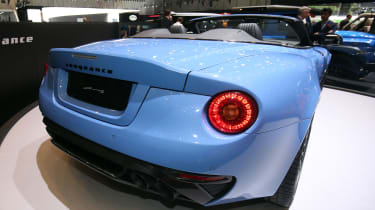 Though the car’s mechanicals – including its 510bhp 6.0-litre V12 - remain unchanged, it’ll take a claimed 200 hours to coachbuild each example.

• Next generation Aston Martin Vanquish to go turbo in 2018

Kahn says it'll be produced in very limited numbers. No prices have been revealed, but with Coupe versions of the WB12 Vengeance reportedly changing hands for around £300,000, it certainly won’t come cheap.

What do you think of Kahn's take on the DB9 Volante? Let us know your thoughts in the comments.