With a V8 under the bonnet, the DB11 is perhaps the car it should have been from the start. Not only is it £13,000 cheaper than the V12, but it’s also more agile, more fuel efficient and more engaging from behind the wheel. And when it comes to being a big, comfortable GT car, the DB11 remains right up there with the best.

All eyes may be on Aston Martin’s striking new Vantage sport car, but quietly rolling down the line at Gaydon is the brand’s 4.0-lite V8-powered DB11. This is the first Aston to be fitted with the new engine from Mercedes-AMG, and although down on power and cylinders compared to the V12 version, our first chance to drive it in the UK tells us it may be the pick of the bunch.

After the first few hundred yards you can immediately sense that the DB11 V8 feels lighter on its toes, however. It’s definitely more nimble and alert to inputs from the steering, too. That’s because the V8 is 115kg lighter than the V12 – all of it falling from the nose. It’s also why the V8 feels virtually as quick on the road. 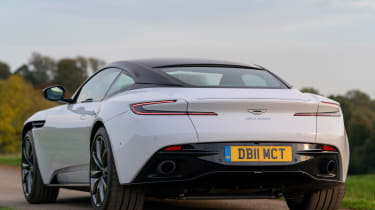 It also has a much more aggressive exhaust note, which ramps up in ferocity when you cycle through the GT, Sport and Sport+ driving modes. In its most aggressive setting the response from the engine and gearbox is instant and enormously satisfying. Although on a cold, damp winter morning, the rear wheels do have a job trying to harness all of that power.

The weight difference really makes itself known when you get to a corner; the lighter front end tucks in quicker and with more precision. The chassis tweaks, which include slighter stiffer rear suspension and softer front suspension (to compensate for the weight loss), give faultless body composure during fast direction changes. The DB11 still feels like a big car, especially on narrow British B-roads, but the V8 under the bonnet brings out the DB11’s more athletic side. 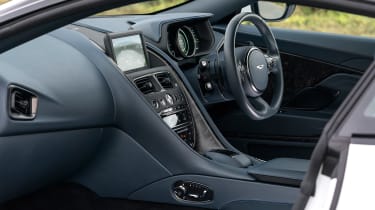 There’s very little trade-off when it comes to being a GT car, either. The ride quality is impeccable for a car packing so much performance, and while there’s a slightly sharp edge to the ride over broken tarmac, you’d be more than comfortable enough covering huge distances in the DB11. At a cruise, the V8 is hushed, smooth and relatively efficient; Aston claims it will return 28.5mpg. In the real world, of course, you’re looking at significantly less.

While the cabin design is unlike anything you’ll find in any other supercar, you can’t fault the attention to detail. Frustratingly, our pre-production test car wasn’t quite up to class standards, but we’re assured this will be improved for customer deliveries.

Double stitched leather covers every surface, however, while marble effect inlays can be fitted to the centre console. One gripe is the rather clunky infotainment system, which is also adopted from Mercedes – it’s a little slow to respond to inputs and not the most intuitive to use thanks to a maze of complicated sub-menus.