With the new Aston Martin Rapide E pointing the way to the next Lagonda, CEO Andy Palmer takes us for a drive to see how it's progressing 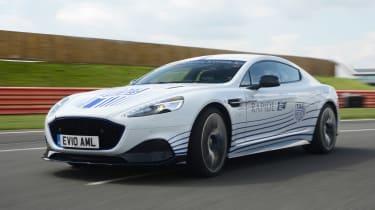 Aston Martin hasn’t been too coy about why its new all-electric Rapide E exists – it’s a test bed for the return of the Lagonda brand.

Only 155 Rapide Es are going to be made, with Aston CEO a potential customer, too. So it only seemed right that when Aston invited us for an exclusive ride around Silverstone’s Stowe circuit in a Rapide E prototype, it was Andy Palmer behind the wheel.

We’d arrived in a 1981 Lagonda, a car that signalled the brand’s 70’s rebirth. “Lagonda’s a bit like the Phoenix rising from the ashes,” Palmer says. “Only this time we’re bringing it back for good.” 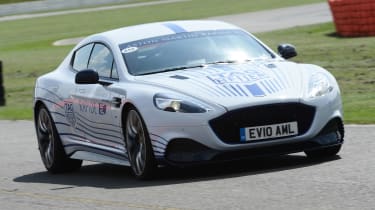 Lagonda will be an all-electric brand, reborn by EV pioneer Palmer – a man who helped launch the Nissan Leaf. And his thinking behind an all-electric luxury brand is sound. “You can spend an awful lot of money on a Tesla,” he says, “But it’s not really a luxury car.

“There’s a whole new breed of entrepreneur out there who want the best car their money can buy, but it has to be electric.”

But before anyone gets anywhere near a Lagonda, the Aston will use the Rapide E to better understand how buyers will use the car. “We’ll get quantitive data from the car, but every one of the 155 buyers has agreed to give us qualitative feedback on the car, too.” 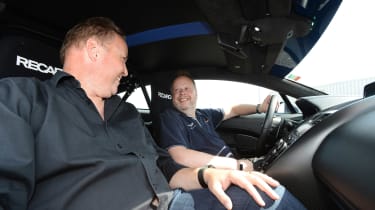 They’ll be getting a car that’s as deeply engineered as any other Aston, too, with the prototype we’re in being used to fine tune things. But why electrify the Rapide? “It was an obvious thing to do,” said Palmer. “It’s got a long wheelbase and there’s space at the front for batteries where the big V12 engine used to be. The balance of this car is actually pretty much the same as the V12.”

So let’s see. Palmer is quite a hand on a circuit, as it proves as the Rapide E gently builds up speed. “We’ve still got some work to do on the car,” Palmer admits. “Matt Becker and his team have got to work their magic, we’re understeering a little too much at the moment.”

Palmer is clearly enjoying being behind the wheel as he flexes his right foot and the familiar EV hit of instant torque – in this case a whopping 950Nm - propels the big Rapide down the short straight.

The brakes do an impressive job of reigning things in before a right and left, leaving us impressed by the speed of the car’s reactions to Palmer’s inputs and the lack of body roll. Yet the ride doesn’t feel as solid as in many a sports car, let alone a heavy electric one. “It’s still got to be a GT as well as a sports car,” Palmer tells us.

Palmer gets faster and faster as each short lap ticks by and it’s easy to forget that you’re not in one of Aston’s more focused machines and that there are electric motors powering the rear wheels. “You can even drift it – look,” Palmer says as he plays with the throttle to adjust the car as we exit the tight corner at the end of another lap. 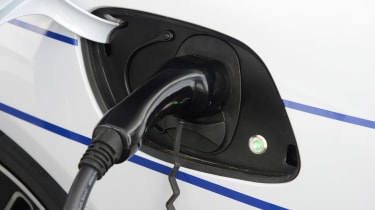 Aston has eschewed a massive battery and chasing a ludicrous 0-60mph speed, instead concentrating on being able to complete a few competitive laps of the 13-mile long Nordschleife circuit and using 800V high-voltage battery technology to enable super-fast charging using 100kW or higher chargers. That said, the Rapide E will still get from 0-60 in under four seconds, on to a top speed of 155mph – the same figure as the number of cars that will be built.

The twin motors on the rear axle produce 604bhp and an intoxicating EV wail. But it’s the sheer pace of the car that helps you forget that there’s not the noise of a screaming V12 under the bonnet. And our short blast with the boss leaves us in no doubt that the Rapide E will be yet another very special Aston Martin.

It also leaves us in no doubt that what Aston has planned for the Lagonda brand in the coming years will be as exciting as anything we’ve seen from Aston Martin before.