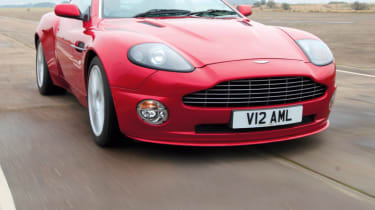 The Works Service manual gearbox conversion releases the ‘true’ character of the Vanquish just as production is about to end. It’s a true British muscle car; fabulous pace, a sensational V12 soundtrack and now with increased interactivity thanks to the manual set-up. The Aston is an accomplished all-rounder, managing to combine the slick ride and handling of the best GTs with supercar levels of acceleration and top speed.

It’s never too late for change... particularly at Aston Martin. While the firm’s Vanquish will be replaced by the DBS later this year, the car has been transformed with the addition of a Works Service manual gearbox option.

The £15,000 conversion can be applied to old and new Vanquishes, and uses a six-speed set-up instead of the original self-shifting semi-auto.

To see what it was like, we tried a Vanquish S that not only had the new manual, but also a series of upgrades offered by the Works Service department. These included the full S pack, with a 520bhp version of the 6.0-litre V12 engine, a limited slip differential and sports suspension, plus subtle bodywork extensions front and rear.

Our car was fitted with a special exhaust system, too. This lets drivers switch the note from neighbourhood-friendly quiet to a raucous sound.

On the road, the slick-shifting gear-box quickly proves it’s worth at least some of the huge cost of conversion. The engineers at Aston paid particular attention to the weighting and accuracy of the lever, and have delivered a meaty feel that’s appropriate to the muscular character of the two-door.

With a progressive clutch action and a hard brake pedal, it’s difficult to resist revving the engine as you change down through the ratios. And once up to speed, the simple addition of a third pedal and a gearlever has improved the whole experience. The driver now feels even more involved with the car.

In fact, as bizarre as it sounds, the Works Service manual gearbox conversion makes this one of the most appealing Aston Martins – particularly if you consider a second-hand Vanquish as an alternative to a new DB9. Just goes to show, you really are never too old to learn a few tricks.

For an in-depth buyer's guide on the Aston Martin Vanquish from Classic and Performance Car click here...