Our verdict on the all-new 565bhp Aston Martin Vanquish supercar, as it goes on sale in the UK 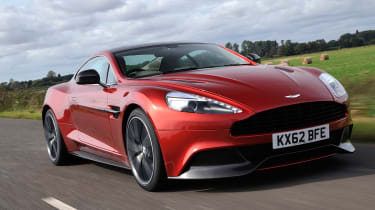 Forget the fact that the Vanquish uses a similar recipe to the DBS it replaces – treated as a standalone product, this is a sensational car. The essential Aston DNA is there, with a thunderous V12 and a sumptuous cabin. Adjustable suspension makes it both accomplished cruiser and full-on supercar. Just like the iPhone 5 is only marginally better than the iPhone 4, the Vanquish is only slightly better than the DBS. But you still want one.

“Why would we make an Aston Martin any different? You don’t just make something new for the sake of it, you make something better.” Those are the words of Aston’s CEO, Dr Ulrich Bez, speaking about the new Vanquish. It’s hard to knock this view, especially when you realise the Vanquish is incrementally better than the DBS it replaces.

Okay, so the car’s low-slung proportions will be familiar, but every inch of the carbon fibre bodywork (a first for Aston) is new – and it’s a stunning design.

A slightly more compact grille is surrounded by a flowing, bare carbon front splitter, bonnet vents and LED running lights, while protruding side strakes extend down the sides. At the rear you’ll find LED tail-lamps inspired by the One-77 hypercar and an integrated spoiler that looks more like a sculpture than an aerodynamic aid.

The interior has taken even greater strides forwards, with a brand new centre console – again inspired by the One-77. Astons have being crying out for this user-friendly new interface, and it features some intriguing novelties.

Touch-sensitive glass buttons vibrate when your finger makes contact, while the new Garmin sat-nav and properly integrated infotainment system are light years ahead of the DBS, with its clunky Volvo navigation set-up and fiddly stereo controls.

Fit and finish is typically gorgeous (each Vanquish interior takes 70 hours to trim, while the whole car takes 300 hours to hand build), although the beige colour scheme of our test car is best avoided. The dashboard has moved forward by 20mm, to create more interior space, and there’s a 368-litre boot – that’s 60 per cent bigger than the DBS’ luggage space.

Like the exterior, the 6.0-litre V12 engine feels familiar, but it’s been overhauled significantly. Variable valve timing, a new fuel pump and a larger intake manifold have increased power by 55bhp to 565bhp and improved fuel consumption by around 10 per cent (official figures are yet to be released).

The engine is also mounted 19mm lower in the chassis, to help the handling. The six-speed Touchtronic gearbox has been improved, too, with 37 per cent faster shifts when you’re in sports mode.

And the result? Well, it feels similar to a DBS – no bad thing, of course. There’s now more torque at lower engine speeds, but like most non-turbo engines, the Vanquish needs revs to give its best. Hold on to a gear and you can sense more urgency as you close in on the limiter, but by that time you’re clinging on tightly – this is a very quick car.

Aston quotes 0-62mph in 4.1 seconds – two-tenths faster than the DBS – and anything around the four seconds mark is real supercar territory. The Vanquish won’t rearrange your internal organs like a Ferrari F12 will, but there’s plenty of performance for the public road, and then some.

The rich, multi-layered V12 exhaust note is glorious, too – especially when you hit the Sport button on the steering wheel and open up the baffles permanently. New launch control also allows you to experience the full 565bhp. Simply push the button marked L/C and move your foot from the brake to full throttle and, after a moment’s pause, the car screams off, with minimum wheelspin and maximum acceleration.

A quicker steering ratio means the Vanquish feels more alert, more of the time, while the wheel weights up beautifully as you load up the outside wheel in corners. The most noticeable dynamic change, though, comes from the three-stage adaptive dampers, which give the car a broader character than before.

Normal mode is surprisingly supple, rounding off sharp jolts like speed bumps with aplomb. Sport mode noticeably firms things up and works well when you’re darting down a smooth country road. Track mode is best left for just that – it’s too firm for normal roads.

Having such distinct steps between the three settings is refreshing to see, but it’s not all good news. Over the short-frequency ripples and bumps we so often encounter in the UK, you’re bounced around the cabin like a pinball, while the springs try to control the car’s weight.

Ah yes, the weight. Despite the full carbon fibre skin, plus carbon on parts of the chassis, the Vanquish only weighs 1kg less than the DBS. Any savings are cancelled out by extras like the new infotainment system and bigger carbon-ceramic brakes.

What has changed, though, is that the chassis is 25 per cent chassis and the weight is better distributed – more of the mass is now concentrated within the wheelbase, which means the Vanquish changes direction quicker and feels more agile.