Audi has teased its next-generation electric car, and our exclusive image shows how it could look when the covers come off 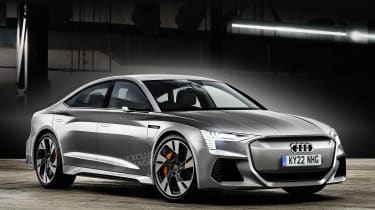 Audi has given the first hint of how its next generation of electric cars could look, by revealing the front end of a concept that’s designed to work on the PPE platform that the company is creating in conjunction with Porsche.

The unnamed vehicle is positioned at the rear of an official image designed to showcase Audi’s approach to electrification - with the e-tron and forthcoming e-tron GT and Q4 e-tron sitting in front of it.

The front of the concept has been lifted, showing a potential new grille treatment that Audi is considering for its electric cars. It looks like an inverted version of the current set-up, with a very obvious panel replacing the conventional air intake. The dark area around the edge of the frame could potentially be used to provide any cooling required, however. Our exclusive image previews how the new car could look when it's official revealed. 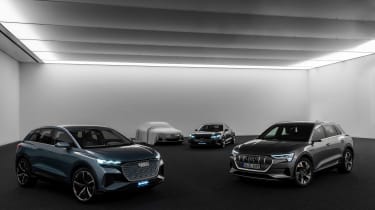 Auto Express understands that the car in question is around the same size as an A7 Sportback, but that it has a slightly higher roofline because of the thicker floor required to accommodate the battery pack. It has been based on the fixed points of the PPE platform, though - a new architecture that Audi and Porsche are developing to maximise range and refinement.

A high-level Audi source told us that the concept is “early work in progress” - but added that work on the front-end styling is more advanced than the car’s flanks; hence the willingness to reveal just one specific section of the vehicle.

PPE, which stands for Premium Platform Electric, is designed to complement the J1 chassis that underpins the Porsche Taycan and the e-tron GT. J1 is aimed at outright performance and low weight, whereas PPE is capable of supporting a wider range of body styles, including saloons and SUVs.

Click here to read our review of the Audi e-tron GT concept...