Could Audi's Ingolstadt plant be the car factory of the future?

We get a glimpse of Audi’s factory of the future and the tech that’s set to boost efficiency, from drones to modular assembly lines 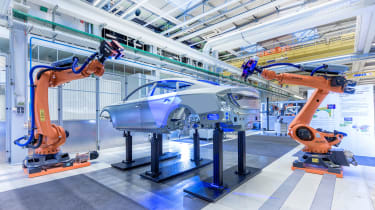 Drones, self-driving forklifts, lasers and a robot called Paula. It might sound like the set from the next Hollywood sci-fi blockbuster, but in fact it’s the future of the motor industry.

As cars get more connected and advanced with each passing model, with auto braking, lane assist and self-parking, so too do the processes that build them. We already have smartphones, smart TVs and even smart kettles – so why not a smart factory?

Digital manufacturing – known as ‘the fourth Industrial Revolution’ or 'Industry 4.0' – is an area of the automotive industry that remains relatively untapped. Yet with the right investment and research, it’s estimated it could be worth £74billion to the UK economy alone over the next two decades. Benefits are achieved by streamlining processes to save time, money and space while boosting productivity. 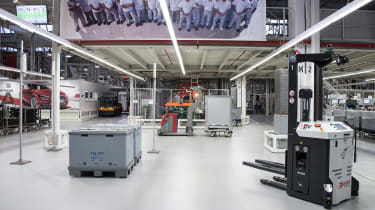 One other manufacturer that’s leading the way is Audi, which has several schemes already on trial at its vast Ingolstadt factory in southern Germany, as well as at sites in Hungary and Mexico. In fact, the new facility in Puebla, Mexico, was designed virtually, and operates 30 per cent quicker than the brand’s other plants.

• "Is Internet shopping the future for car buyers?"

Dr Hubert Waltl, board member for production and logistics at Audi, told Auto Express: “Creativity, speed and flexibility are more important than ever. One day the assembly line will have served its time when it comes to volume production.” It’s a bold claim, but the production line dates back to Henry Ford’s Model T more than 100 years ago. Then, “you could have any colour as long as it was black”. 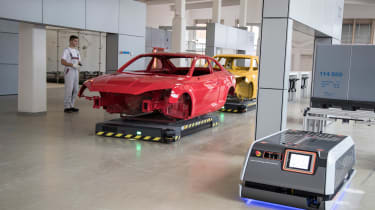 Times have changed, though, and cars today have little in common with that trailblazing yet uniform vehicle. Their levels of personalisation have gone sky high: from paint colours to seat leather, infotainment options to roof antennas – of which Audi has 56 versions. It means building these vastly different cars on a single production line just doesn’t make sense.

Waltl explained: “Standardised processes reigned in the first automobile factories. They were supposed to make the automobile affordable. Today, our customers want the opposite. Our production should make that possible, with new manufacturing procedures.”

• Could whiskey be the car fuel of the future?

One answer is a modular assembly line, allowing cars to be carried to different stations by self-driving robots rather than a linear conveyor belt. Lower-spec models could be transported further along the process, missing out pods of workers where they’re not needed. 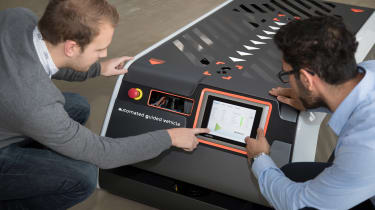 Such a line has the ability to speed up build times, and while it might seem risky to have cars wandering about a factory, sensors and GPS software can track any vehicle to within 5cm on the modular line.

We met Paula, one such robot tasked with carrying cars and parts. Paula is currently being trialled by Audi, and is one of five Automated Guided Vehicles (AGVs) being used. It comes with software similar to that found in the self-driving RS7.

The AGVs currently transport air-con units to the assembly line for the A3 and Q2, with a maximum payload of 1.2 tonnes. However, their uses are likely to extend way beyond this over the next few years. 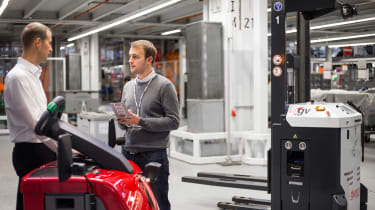 It’s a similar story for the self-driving forklift trucks. These carry supplies around the factory, so areas can be constantly stocked. Audi has 16 such vehicles in use, with the ability to work 24/7, 365 days a year.

Currently, these transportation jobs are done by workers, but Audi asserts that the move to a smart factory won’t see people lose their jobs. Instead, Fabian Rusitschka, managing director of Arculus – the start-up behind the modular assembly line idea – said: “Robots should not replace operators, but humans should be supported. It’s a great benefit for operators. Employees can be used in more productive jobs to increase productivity.”

• Bosch shows off cockpit of the future at CES

One development designed to aid workers is the Audi Laser Tracking System – currently with a patent pending – which can move shelves around so a worker has the correct box of parts to hand at the right moment. The laser scanner-controlled units can move independently or in unison, with 360-degree on-the-spot rotation. 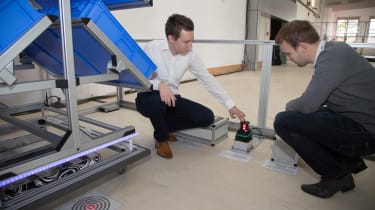 Other designs to help staff are CleverKlaus, a camera-based system that gives step-by-step confirmation of the completion of tasks such as clipping electronics into the door; LBR Inline, which automatically screws in the underside of a vehicle, judging the number and positions of screws for each type; and FlexShapeGripper, a soft-tipped arm that can adapt to any shape and size of part and refill trays to keep pace with requirements and the car that’s next on line.

Waltl said: “Our employees are at the heart of intensive human-robot co-operation. The machines around us are learning every day.”

The factories of the future will be a hive of activity in the air, too, not only on the shop floor. Drones will take to the skies to deliver parts such as steering wheels or anything weighing no more than 5kg, on a pre-programmed route using optical and laser sensors.

It’s not only inside where factories will look different. Servicing of machines will be done remotely, with off-site teams offering live support via cameras on workers’ headsets. Outside, areas for storing completed cars will be streamlined with predictive algorithms timing the arrival of trucks to transport them to dealers. It’s the factory of the future – and it’s happening right now.