We bring Audi’s new premium supermini face-to-face with its classic seventies forebear: the pioneering 50 in an exclusive test. 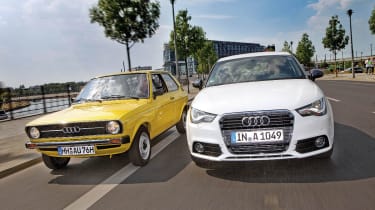 If you thought the new A1 was Audi’s first supermini, think again! The brand has built its reputation on big, desirable luxury cars, but there’s a small skeleton in its closet you may not know much about...

Launched in 1974, the Audi 50 is the spiritual predecessor to the A1. It featured a stylish yet practical body, as well as equipment not usually seen on a car in its class. But bosses had misjudged the market. The following year, the 50 was rebadged as a less luxurious and cheaper VW Polo – and proved far more of a hit.

So, to see if Audi has learned from its mistakes, we’ve lined up a unique comparison – and brought the A1 face-to-face with the original 50. Weighing in at 720kg, the Seventies model was powered by 50bhp 1.0 or 59bhp 1.4-litre petrol engines. But good looks were its real strength, alongside practicality, with large glazed areas and a hatchback boot.

Premium is a fairly recent term for describing a classy cabin, but the 50 definitely had some luxury touches. The large strip of wood running across the dash, reading light, digital clock and full carpeting were features usually reserved for cars from classes above at the time. Buyers could even opt for a passenger side wing mirror, seatbelts and a rear windscreen wash/wipe.

The 50 was sold only in mainland Europe, and aimed at young buyers. Unfortunately for Audi, it only achieved the latter in VW guise. The Polo did come to UK shores, and this set a path for the success of the VW supermini to this day. Fast forward to 2010, and the favour is returned, with the A1 sharing the latest Polo’s underpinnings.

The body is pure modern Audi, though. With its aggressive headlights and wide track, the newcomer has immense road presence for such a small car. Details like the LED tail-lamps, contrasting roof and intricate alloys give it the premium look the company is aiming for. The interior is on a par with larger Audis, using expensive-feeling materials, while details like the jet turbine air vents add class, particularly with the Wasabi Green finish of our car.

Although the two models appear to be worlds apart, they have a lot in common. The A1 is very stylish, as the 50 was in its day, and both cars are packed with kit – although the classic has nothing to match the new model’s sat-nav, borrowed from the flagship A8. But the 50’s Achilles heel was its price, relative to the market.

The A1 has this nailed, starting from £13,145. That makes it ideal for drivers wanting to downsize without compromising on luxury or efficiency. It’s likely to tempt young buyers, too. So Audi appears to have timed the A1 perfectly – and its success should be a certainty.