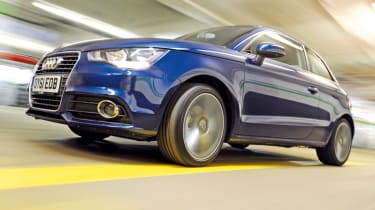 This A1 isn’t perfect, but it’s one of the most luxurious and uncompromised tax-free models on sale. It boasts a classy cabin, grown-up driving experience and impressive power. The new diesel engine will provide considerable savings for long-distance drivers and London residents. But if you’re not racking up the miles, you may be better off with the cheaper and more refined petrol models.

Eye-catching looks, grown-up driving dynamics and one of the best cabins in the class – Audi’s A1 almost has it all.
Until recently, though, no version has emitted less than 100g/km of CO2, to make the car exempt from road tax. Thankfully, Audi has changed that and all 1.6-litre TDIs now break through that threshold. So does this make the A1 the perfect all-rounder?
Video: watch CarBuyer's video review of the Audi A1
[[{"type":"media","view_mode":"content_narrow","fid":"69267","attributes":{"alt":"","class":"media-image"}}]]
Audi has made changes to the engine management and fuel systems to cut 6g/km from the original figure, but those small tweaks have a big impact on running costs. Not only do you save £20 a year on road tax, but London drivers no longer have to pay the £10 daily Congestion Charge. Economy improves from 70.6mpg to 74.3mpg, too, but the best bit is that the list price hasn’t changed.

The engine provides 104bhp and 250Nm of torque from just 1,500rpm, which makes it perfect for town driving and overtaking. It also gives the car a 0-62mph sprint time of 10.5 seconds. The slick five-speed manual is also a pleasure to use around town.
Compared to the petrol A1 we run on our long-term fleet, the diesel engine is fairly noisy, especially on start-up. But it’s no worse than any of its rivals and quietens down considerably once you’re cruising along. Plus, it’s drowned out by tyre roar once you’re on the motorway.
The only other black mark is the ride, which could be too firm for some. The standard sports suspension fitted to all S line models seems to emphasise potholes and rough roads, and the 17-inch wheels, although great to look at, don’t help.
You can live with these two gripes, though, because the A1 is such a luxurious and premium package inside. The cabin is easily the best in class in terms of layout, design and materials. It’s not hard to imagine you’re driving a larger Audi, although the harsh ride and occasionally noisy engine both do their part to remind you that it’s a small, VW Polo-sized car.
On the plus side, handling is as grown-up as you’d expect from an Audi, although not as much fun as a Ford Fiesta. The well weighted steering is perfect for inspiring confidence in corners, while the strong grip and a lack of body roll make the A1 a capable car that’s happy to be chucked around. The enthusiastic petrol engines are more fun, but the light kerbweight alone makes this car a more enjoyable drive than the larger, more sterile Audis further up the range.
Inside, the A1 is surprisingly spacious, and while rear seat passengers don’t have acres of room in which to stretch out, journeys of an hour or two will be comfortable.
The boot offers a reasonable 267 litres of capacity, and when you need to fit something bulkier in, the rear seats fold completely flat to liberate 920 litres of space. So this A1 is an eco-friendly, cheap-to-run car that doesn’t feel in any way compromised.
And while some green specials are slow, noisy and expensive, Audi has tweaked the 1.6 TDI without raising the cost. That’s very welcome, as this model wasn’t exactly cheap in the first place, with prices from £17,865.