The Audi A1’s day-to-day running costs should be no more than rivals, but it may keep its value better 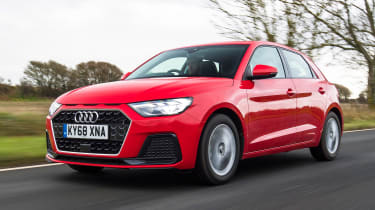 The 25 TFSI is the smallest engined A1 you can buy, so it's not surprising it's also the most economical. The three-pot 1.0-litre can return 49.6mpg on a WLTP combined cycle. There are as yet no hybrid or ‘green’ powertrain options, but efficiency of the base models remain impressive.

The 35 TFSI has cylinder deactivation to improve its figures. By cutting off fuel to half the cylinders when they’re not under load, you can mimic the efficiency of a smaller engine. Despite having 148bhp and a 0-62mph time of 7.7 seconds, the 35 TFSI can return 44.8mpg on a WLTP combined cycle.

The mid-range 30 TFSI manages 48.7mpg and emits 131g/km of CO2 under the latest test regimes, so anyone using an A1 as a company perk will have to pay a Benefit-in-Kind tax bill of 30 per cent of the invoice cost. There are no diesel models mooted, but a mild-hybrid version is reportedly on the cards in the longer term. 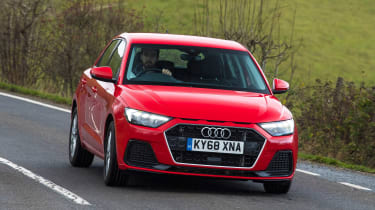 In general terms, the Audi A1 shouldn’t cost any more to run than similarly high-spec supermini rivals, at least when it comes to filling up, insurance and road tax. However, maintenance costs could be a little higher than some, as you’ll be helping to play for all those swishy Audi showrooms.

The 25 TFSI is the cheapest to insure as that’s only Group 16. When the sportier models arrive the bills go up commensurately with performance, the most expensive models to insure current are the 35 TFSI, which is Group 25 and the 40 TFSI which is Group 31.

The last Audi A1 was a star performer when it came to holding on to value, but the latest model is not quite up to the same standard. The five-door hatch retains an average of 45% of its value over 3 years and 36,000 miles, while the Citycarver model fares a little better keeping around 49% of its list price over the same period.