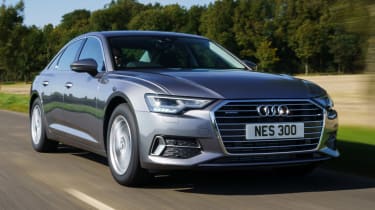 The tax savings are hugely appealing on the Audi A6 50 TFSI e, but they’re similarly appealing on rivals that offer better value, a better drive and fewer compromises. Things are moving so fast on the electrification front, this new A6 already feels like it's been left behind a bit.

A plug-in hybrid is an essential in any car maker’s line-up these days, more so on models that appeal to company car drivers – the Benefit In Kind savings are too good to ignore. So it might come as a surprise that it’s taken Audi so long to offer an electrified A6, but the new 50 TFSI e has just arrived in the UK and we’ve driven it.

With an official CO2 emissions figure of 35g/km, you’ll pay company car tax at a BIK rate of just 10 per cent this tax year (11 per cent for 21/22), saving a 40 per cent rate tax payer over £4,000 in tax versus a slightly less powerful petrol equivalent A6. That’s why plug-in hybrids are so appealing right now.

But does that appeal extend to the car itself? This Audi plug-in takes the sleek and beautifully-built A6 with a 2.0-litre TFSI turbocharged petrol engine and adds an electric motor, which is integrated into the transmission.

A 14.1kWh battery pack sits under the boot floor and provides the power for the electric motor to run solo for a range of around 25 miles in the real world or to give an electric boost for added performance – leading to an impressive 0-62mph time of 5.5 seconds.

With 25 miles – give or take – being the average distance a UK driver travels every day, you should be able to use your A6 plug-in with electric power for most of the time, assuming you can plug it in every night like your mobile phone. And if your home charger is rated at 7.2kW, you’ll get a full charge in just a couple of hours. 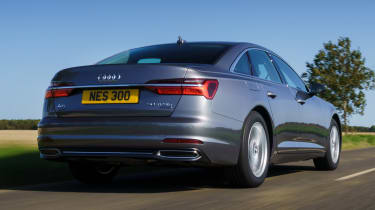 But being aimed at higher-mileage company car drivers, you’ll have to make use of the petrol engine on board, too, or more likely a mix of the two.

In fully electric mode, the A6 is as quiet and smooth as you’d expect, resisting the temptation to fire up the petrol motor unless you’re heavy with your right foot. There are three settings to choose from EV, Auto, and Hold; the first runs in EV power solely for as long as possible, Auto does the hybrid job of mixing petrol and electric, and hold puts the engine to good use so you can use battery power for a later part of your journey, perhaps around town.

However, one innovation we really didn’t get on with was Audi’s Active Accelerator Pedal. It provides rather odd-feeling haptic feedback with variable pressure points for driving in electric-only mode; it just feels like a sticky pedal to us. We don’t think other car makers will be rushing to copy this particular feature.

When the petrol engine does fire up, you might notice a very slight shiver, but it’s pretty unobtrusive. Only if you push hard on the throttle – overcoming the active pedal’s annoying feedback – do you get to hear the four-cylinder engine, but even then it’s not something that will have you reaching to turn up the volume on the audio system.

Another mild frustration is Audi’s continual reliance on its dual-clutch DSG automatic gearbox – it’s never been the slickest shifter and nothing’s changed when it has hybrid power to deal with.

Anyone switching out of a regular A6 into the plug-in model will notice two other things. Firstly, the extra weight of the batteries mean the reasonably supple ride of the A6 has moved up a notch on the firmness scale. It’s not uncomfortable, but nor is it as smooth as on other non-sporting models in the A6 range. The A6 remains less engaging or capable than a BMW 5 Series to drive, too, although that might not matter to many. 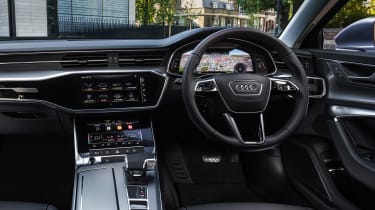 Then there’s the boot – down from 530 litres to just 360 litres thanks to the battery pack. That might make packing a family’s luggage a little tricky, which is a shame, because there’s plenty of space inside for four people – five if whoever’s in the centre seat doesn’t mind sitting astride the transmission tunnel.

Otherwise, inside is usual Audi fare – everything looks lovely, the twin screens offer haptic feedback that we actually like, and there’s Audi’s digital instruments, which have been updated with a power meter, range display and a graphic to show whether power’s coming from the engine, battery or both.

However, our car had a very un-Audi-like rattle coming from behind the top infotainment screen. We could stop it by pushing up from underneath, but as soon as you let go, it returned – and it was loud.

The tech extends to your Smartphone, though. Not only will the A6 wirelessly connect via Apple CarPlay or Android Auto, but you can use the myAudi app to activate climate functions including heating the seats, steering wheel, mirrors and windows.

All that doesn’t come cheap and the Sport trim of our car costs £54,025 rising to £78,285 for the all-singing, all-dancing (to a Bang and Olufsen hifi) Vorsprung model. You’ll have to check the equipment lists carefully, though – in spite of the price, there’s no no electric power on the seats of our Sport model, and while you might only have to press a button to start the car, you’ll have to take the key out of your pocket or bag to lock or unlock it.