Audi’s A6 Black Edition delivers a high-spec, sporty A6 executive saloon at a price that’s hard not to like

The Audi A6 Black Edition is a limited edition, high-spec version of the BMW 5 Series and Mercedes E-Class rivaling Audi A6 saloon.

This fourth generation Audi A6 was launched at the end of 2011 and it runs the BMW 5 Series close for executive class car honours thanks to its good looks, decent drive and excellent build quality. The Audi A6 is also the only car in its class available with four-wheel drive thanks to the Audi quattro system, and the Ultra spec boosts performance and efficiency without hiking up the price.

Launched in 2013, the Audi A6 Black edition is based on the mid-range Audi A6 S line, so it keeps the leather seats, Xenon headlights with LED daytime running lights and other luxury features.

On the inside, the Audi A6 Black Edition is fitted with slick piano black trim inlays, a flat bottom three-spoke steering wheel, plus a powerful BOSE music system which is compatible with the fourth generation iPhone and iPod upwards. 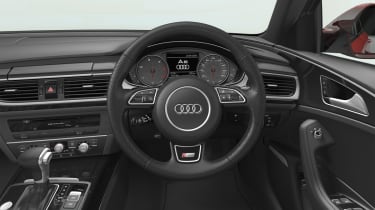 The Audi A6 Black Edition is only available as a saloon, so there's no A6 Avant estate version and Audi hasn't announced plans to make one. What's more, there's bad news for petrol buyers as the only engines available are a selection of 2.0-litre and 3.0-litre diesels with varying levels of power. All Audi A6 models get stop-start technology across the range to aid efficiency.

However, this is bettered by the Audi A6 Black Edition Ultra, which uses Audi's lightweight Ultra technology to improve efficiency and comes fitted with the automatic seven-speed S tronic gearbox. This particular model returns an impressive 64.2mpg and emits 114g/km of CO2.

The remainder of the Audi A6 Black Edition engine line-up is comprised of a selection of rapid 3.0-litre TDI diesel engines, which are available with 201bhp, 241bhp, or 309bhp. Again fitted with a front-wheel drive drivetrain, the most efficient of the 3.0-litre units is fitted with the six-speed manual gearbox, and has emissions of 139g/km of CO2 and a respectable fuel economy of 53.5mpg.

The other front wheel drive Audi A6 Black Edition with the 3.0-litre TDI diesel engine comes fitted with the automatic eight-speed Multitronic gearbox. This particular car returns 55.4mpg and 134g/km of CO2.

Next up in the Audi A6 Black Edition quattro range is the 241bhp unit, which is once again fitted with the S tronic gearbox, and it emits 156g/km of CO2 and does 47.9mpg.

The most powerful car in the entire Audi A6 Black Edition line-up is the 308bhp quattro, which surprisingly returns a half-decent 44.8mpg and CO2 emissions of 166g/km.

Like the rest of the Audi A6 range, the Black Edition's steering isn't quite as communicative as that found on a BMW 5 Series or Jaguar XF, but thanks to Audi's extensive use of aluminium, the A6 is still good to drive and it feels very light.

However, it's worth remembering that the Audi A6 Black Edition is based on the S line car which already has its suspension stiffened and lowered by 20mm. This makes the ride particularly jarring over potholed surfaces. Factor in the 20-inch wheels on the A6 Black Edition, and if you value your back, it may be worth considering asking Audi to soften the suspension at no extra cost.

Audi has an excellent reputation for reliability and the A6 has proved no exception as it finished 26th out of the 150 cars featured in our 2014 Driver Power customer satisfaction survey.

The Audi A6 has a maximum five-star Euro NCAP safety rating, with an impressive 91 per cent for adult occupant protection.

Audi fits every A6 model with standard safety kit such as six airbags, as well as traction and stability control.

There is also technology borrowed from the flagship Audi A8 such as a heads-up display. You can also specify optional extras on the Audi A6 such as adaptive cruise control, lane departure warning and a blind spot detection system.