Audi has worked hard to improve the A6’s interior space, and it shows 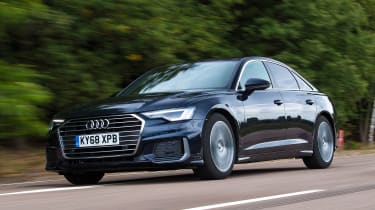 The Audi A6 has only grown in length by 7mm compared to the outgoing model, but by stretching the wheelbase by 12mm, greater gains have been achieved with regard to interior space.

Few complaints tend to be made about the environment offered in the front of large saloons, and that’s certainly the case in the A6. The driving position is excellent, the seats provide fine levels of leg and back support, while a large central storage cubby and a brace of cupholders reside in the centre console. 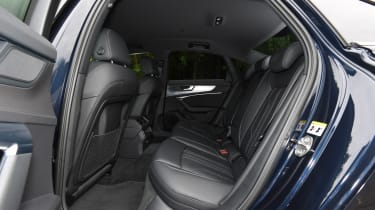 It’s in the rear where the greatest improvements have been made, though. Legroom in the back has increased by 17mm, while headroom is up by 10mm over the old A6. These sound like small numbers – and they are – but the overall impression is of a far more spacious car.

Unless you’re sitting in the middle-rear seat, that is, where a significant transmission tunnel hump will force you to splay your legs in an ungainly and uncomfortable fashion – though this is something of a given in this class of car.

Something else that’s a given with large executive saloons is a decently-sized, if compromised in shape, boot. At 530 litres, the A6’s boot is competitive (and identical to the 5 Series’ volume), if not class leading (the Mercedes E-Class gets an extra 10 litres), but the prominent load lip and relatively small loading aperture are arguably two of the reasons why SUVs have become so popular in recent years. In fairness, Audi caters for those after more, and more accessible luggage space, with the A6 Avant.

No towing figures are available at present for the new A6 but, as is usually the case, the larger diesel engine should convey the car with a greater capacity, and a more relaxing towing experience.