We take to the road in Audi's all-new stylish CLS challenger. 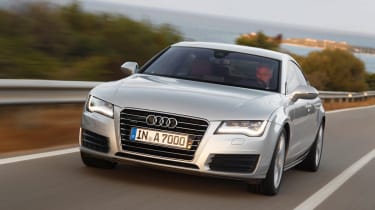 The Audi A7 is a very impressive car. It’s stunning both inside and out, is very comfortable, feels extremely well built and will put a smile on your face when the road gets twisty. What’s more, it oozes enough luxury to make the A8 seem pointless for anyone but a chauffeur. And while a large four door coupé is hardly a new idea – nobody does it better than Audi.

Is there such a thing as too much choice? Audi clearly doesn’t think so. The German firm’s range already consists of 20 different body styles, and now there’s a new one to choose from – the new, Mercedes CLS-rivalling A7 Sportback.

There can be no denying the A7 is striking. In fact it’s arguably Audi’s most beautiful car after the R8. Inside, the A7 is just as stunning. The dash, with its wraparound effect, the cool-looking instruments and the layout of all the buttons are all incredibly well executed.

Video: watch CarBuyer's video review of the Audi A7 Sportback

The A7 impresses in the back too. While it’s a strict four-seater most adults will find it no less comfy than an A8. There’s enough space to stretch your legs out, and despite that sloping roofline, only those well over six foot will find head room a squeeze.

As for practicality, the boot is quite shallow but it does goes back a long way which means there’s about the same overall volume as the current A6. However, that hatchback tailgate means the space is more useable. Plus you can always fold the rear seats down to increase capacity from 535- to 1,360-litres.

On the road, the A7 is very good to drive. The car is based on an entirely new platform, which incidentally will underpin the next A6, that uses 20 per cent aluminum to help keep weight down. However, tipping the scales at around 1,700kg, the A7 is certainly no waif.

Despite its size it handles very well with almost unshakable poise. Our test car was fitted with the optional air suspension, which constantly adjusts to deliver the best balance of handling and comfort, and Audi’s famed quattro all-wheel-drive which gives seemingly endless grip. Barely any noise enters the cabin at any speed, allowing you to waft along in a cocoon of tranquillity.

The A7 will be available with a choice of two petrol and two diesel engines when it hits UK roads early next year. We drove the 242bhp 3.0-litre TDI. It comes with the latest version of Audi’s dual-clutch seven-speed S tronic paddle-shift gearbox as standard and betters the equivalent Mercedes CLS and BMW 5 GT model for performance, economy and emissions.

But whichever version of the A7 you go for, you’ll be able to personalize it with an almost infinite array of options, including internet access and a satellite navigation system that now uses Google Maps and is linked to some of the car’s key controls so that it can do things like automatically dip the headlight beam when it recognizes that you are about to drive into a town.

A word of warning though, if you were to select every conceivable extra, you could bump up the cost of the A7 Sportback to £94,020!

The A7 isn’t perfect. The electronic tailgate is more of a hindrance than a help, the fuel-saving stop-start system cuts the ignition entirely if you stay still for too long, which can be annoying, and the electric power steering lacks feedback. But all these are minor complaints as overall the A7 is a very impressive car.