Entry-level, three-cylinder Audi Q2 aims to deliver pace and efficiency, and is arguably the pick of the range 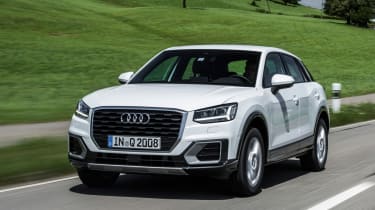 This entry-level 1.0 TFSI is arguably the pick of the Q2 range. It’s quick enough, remarkably quiet and will be cheap to run, and comes wrapped in a stylish crossover body. If you spend a lot of time on the motorway, then the 1.6 TDI might make more sense, but this three-cylinder is more than capable on the occasional longer trip. If you can hold off until November to buy a Q2, it’ll be well worth the wait.

Order books for the new Audi Q2 small crossover opened in August 2016, and while the familiar 1.4 TFSI petrol and 1.6 TDI diesel are available, there’s also a rather intriguing 1.0-litre petrol on offer.

The four-cylinder motors are expected to take the lion’s share of sales, but from November, this 999cc turbocharged three-cylinder will be the entry point to the range. However, it will only be available in SE or Sport trim, with top-spec S line models offered exclusively with the bigger engines.

The 1.0 TFSI is the same unit found in the Volkswagen Golf Match BlueMotion, so comes with 113bhp and 200Nm of torque. It’s lighter than the 1.4 TFSI and 1.6 TDI units, and while fuel economy and emissions have yet to be confirmed, it’s likely to be more efficient than the larger petrol engine by around 10 per cent.

The car as a whole seems more agile, too. With less weight in the nose it feels alert, and darts from left to right with remarkable precision, unaffected by the Q2’s taller structure. It’s remarkably good fun to drive, with direct steering and plenty of grip through tighter bends. 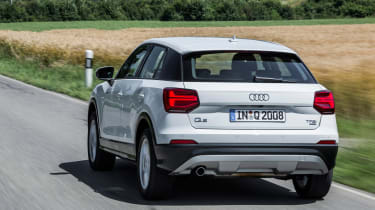 You never feel like you need to wring the engine’s neck, either. The tiny turbo does a good job of generating sufficient boost, and providing you keep on top of the gears it rarely appears short of puff. Every model comes with a six-speed manual gearbox, so high-speed refinement isn’t an issue.

In fact, the dinky Q2 is perfectly at home both around town and on the motorway. The characterful three-cylinder thrum isn’t intrusive, and even under hard acceleration it emits a pleasing note. What’s more, sufficient sound insulation – in conjunction with that six-speed box – means longer journeys don’t leave your ears ringing.

Our only complaint with the Q2’s driving experience is the ride. There’s no adaptive damper option, so buyers will need to make do with the standard springs. It’s by no means uncomfortable, but just like the 1.6 TDI we've driven, this three-cylinder model appeared to seek out tiny imperfections in the road. This could prove wearing on extended trips, although it’s certainly no worse than the sporty set-up you’ll find in a Mazda CX-3. 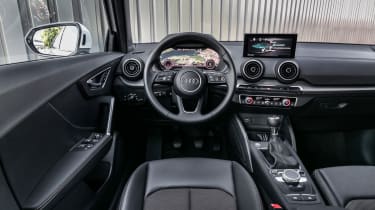 Inside, all the usual Audi trinkets ensure quality doesn’t take a dip. The beautifully crafted dash and cabin will put the car at the front of the compact crossover class, and technology like the optional Virtual Cockpit dials on our model offer a premium air that wouldn’t feel out of place on a car costing four times the price. In fact, the same digital dials are also available on the flagship Q7, which starts at just less than £50,000.

Elsewhere, all Q2s – including the entry SE – get alloys, a seven-inch screen with MMI controller, Bluetooth and DAB radio. Upgrade to Sport trim, and you’ll benefit from sat-nav, cruise control, auto lights and wipers and Audi’s Drive Select system. There are plenty of soft-touch plastics, and all the controls are satisfying to operate. 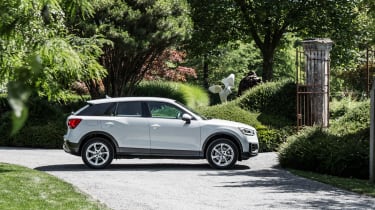 If you can make the jump to Sport, it’s well worth the extra. For an additional £1,550 – or a few pounds per month on finance – you get all of this kit, as well as 17-inch wheels and extra silver detailing inside and out. On a car as style-orientated and spec-sensitive as this, that could make all the difference come resale time.

Boot space and practicality match the diesel we drove earlier this year, and while the Q2 is a little small compared with some rivals, those stepping into the SUV market from models like Audi’s own A3 hatch won’t be disappointed. There’s plenty of space in the back for adults, with decent headroom and sufficient kneeroom. The 405-litre boot is big enough, and folding down the rear seats reveals a 1,050-litre load bay.