We take the Audi Q2 1.6 TDI Sport for a spin for the first time. How does Audi's smallest SUV do? 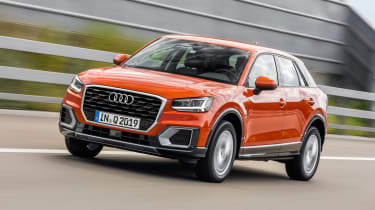 A new Audi SUV was always destined to be a sales success, but our first European test proves the Q2 is worthy of all the hype. It looks great, drives well and should cost mere pennies to run if you opt for this frugal Q2 diesel model. With more and more people buying their cars on finance or PCP, the higher list prices shouldn’t prove too daunting either. The ride is on the firm side, and practicality isn’t quite as good as you might hope for an SUV, but that shouldn’t detract from an otherwise very compelling and high quality package. You can expect to see a lot of these on UK roads when the Q2 arrives later this year – and deservedly so.

SUVs are big business, and few manufacturers are more aware of this than Audi, which this year launches its fourth pumped-up ‘Q’ model. The Q2 is the brand’s smallest crossover, joining the new Q7 and soon-to-be-replaced Q3 and Q5 – in a product line-up that now spans a colossal 44 cars.

We drove the Q2 as a final-stage prototype in Cuba back in May but this is our first chance to try the car prospective buyers will see in showrooms from November. Audi predicts an almost even sales split between the familiar 1.4 TFSI petrol and 1.6-litre TDI diesels – and it’s the latter we try here.

As with the TFSI petrol, this entry-level diesel is immediately recognisable as an Audi, though designers have done away with the cookie-cutter approach applied to the brand’s staple saloon cars – bringing something altogether quirkier into the mix. At the front the Q2 gets a new take on the octagonal family grille, flanked by a set of sharp headlights and gaping air intakes. 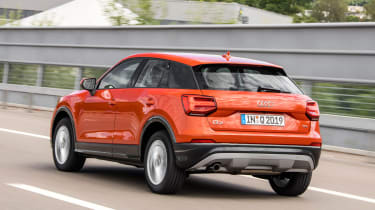 To the rear, the low roofline and high haunches give it a squat look without detracting from the Q2’s SUV styling – at 1.51m tall, it’s sits noticeably higher than the 1.42m A3 Sportback and only a little lower than the 1.65m Q5.

The well-considered and nicely proportioned design comes into question down the side, where the strange double crease joins ahead of the rear door handle. It looks a little fussy in our eyes, though beauty is, of course, in the eye of the beholder. Audi claims over five million different colour and trim combinations, so whatever you like, there should be an Audi Q2 for your tastes.

All cars come with 16-inch wheels, Bluetooth connectivity and a seven-inch TFT screen, though our mid-spec Sport car added larger 17-inch wheels, sat-nav and cruise control. The range-topping S line trim is expected to be as popular as ever, with sportier styling, LED lights and sports seats as standard.

Those familiar with Audi’s latest product range – including the new A4, TT, and recently revised A3 – will feel right at home inside. The beautifully finished interior sets a high class benchmark, with our car featuring the optional Virtual Cockpit dials. This setup makes less sense in the Q2 than it does in an R8, but it’s a welcome feature that only adds to the car’s premium feel. 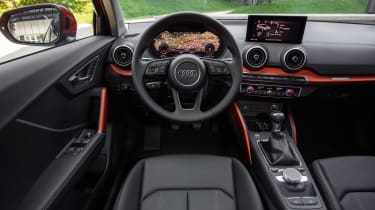 There’s plenty of space in the back for adults, with even those over six-feet tall finding sufficient headroom. Kneeroom is fine, though cars like the Nissan Qashqai are more accommodating for passengers in the back. Behind the rear seats there’s a sizeable 405-litre boot, which is 25 litres more than an A3 Sportback – but fold them down and you’ll find the 1,050-litre load area is actually 170 litres shy of its hatchback sibling. The moveable boot floor means it can be raised up to remove all traces of a load lip, while luggage nets can be specified to hold loose items and shopping bags in place.

Having previously reported on the 148bhp 1.4-litre four-cylinder turbo petrol, it’s the less powerful diesel we’re driving here on European roads for the first time. The 113bhp 1.6-litre engine is lifted straight from the VW Golf and Audi A3, and sends power only to the front wheels.

In our car, the unit was mated to a slick six-speed manual gearbox, though buyers can specify a seven-speed dual-clutch auto for an additional £1,550. The manual works just fine, though – so long as you’re prepared to hold on to the gears to make the most of the power, which doesn’t peak until around 3,200rpm.

Around town it’s quick off the mark and the speedy steering makes manoeuvring simple and straightforward. Visibility could be better out the small rear window, but the reversing camera on our car made things much easier. 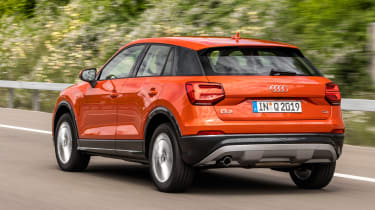 The Q2 TDI will pick up speed at a satisfying rate, too, and is more than capable of accelerating into faster moving traffic on busy motorway slip roads. Those that require more power should look toward the powerful petrols or larger, faster 2.0-litre TDI, though our car should suit most buyers.

In all the associated press literature, Audi draws many comparisons to the cars like the fine-handling MINI Countryman and BMW X1 – and on twistier sections of tarmac it’s easy to see why. The Q2 feels taught and well controlled despite the raised suspension. It shows very little body roll and decent grip. The steering is well weighted even without the Drive Select system found on higher specification cars, allowing you to place the car with plenty of confidence, too. 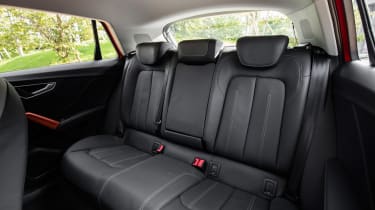 Our Q2 was also pleasantly refined at a cruise, and will return around 65mpg on a longer run. That’s impressive for any car, let alone one in a bulky crossover body – allowing decent distances between fill ups. There is a bit of wind whistle around the A-pillar and door mirrors, but it’s only really noticeable at really high speeds without the radio on.

Our biggest issue with the Q2 was its ride. On the relatively smooth Swiss autoroute the small SUV seemed to pick out imperfections that were otherwise invisible to the naked eye. It resulted in a rather fidgety ride on standard springs – forcing us to recommend the pricier adaptive dampers. This system offers drivers a choice of Efficiency, Comfort, Auto, Dynamic or Individual modes, affecting throttle response and steering weight, too.