We've already driven the diesel-powered Audi Q5 on UK roads, but now we get the chance to see what the TFSI petrol version can do 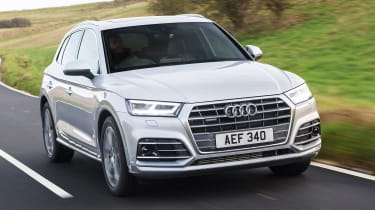 While the new Audi Q5 is a fine SUV, with its quality interior, practical shape and quiet drive, this petrol version won't be the version that suits most buyers. It's much thirstier than the diesel, and while performance is impressive, the engine doesn't suit the car's chassis. Go for the punchy diesel version for better economy, more relaxed progress and a better-value car overall.

The new Audi Q5 has arrived in the UK, and following our comprehensive road test of the big-selling diesel version, we've now had the chance to drive the 2.0-litre TFSI petrol model on British roads.

As with many of the latest crop of Audi models, the designers have played it safe with the new look. The Q5's updated lights and grille may mark out the new car to those in the know, but the overall shape is so similar to the previous generation that you'd be forgiven for confusing them.

Get inside and it's a different story, though. Just like in recently updated Audis like the A5, high-quality materials and a simple, clean dashboard design mean the Q5's interior is up there with the best in its class. 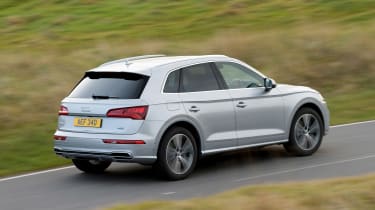 It's packed with the latest tech, with easy integration for Android Auto and Apple CarPlay, and the comfortable driving position and luxurious seats add to the quality feel. Our car was fitted with the £250 Virtual Cockpit screen instead of traditional dials; it looks great and makes following sat-nav instructions much easier, because they can be displayed right in front of you.

Our car was also fitted with one of the most expensive options you can get: adaptive air suspension. We found that the diesel car on sports suspension had an unsettled ride, feeling particularly harsh around corners. While the air set-up is better, it's still not completely smooth, even in the comfort setting - although the 20-inch wheels fitted to our test car can't have helped composure over Britain's rough roads.

The air suspension also allows a firmer setting for more dynamic driving, but it doesn't feel much different from the comfort setting. You'll definitely notice the car raising and lowering itself if you change settings while stationary, though - and the low-speed off-road mode does allow lots of extra ride height.

As with the diesel model, the lifeless steering and capable-but-dull drive means the Q5 isn't likely to appeal to keen drivers - and that means this racy petrol model makes even less sense. 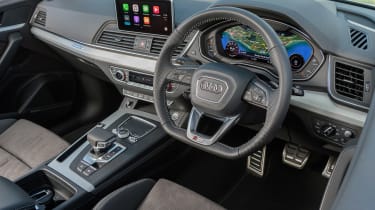 The 2.0-litre TFSI petrol and seven-speed dual-clutch gearbox work well together, whether you're driving around town or on faster roads, with slick changes and excellent performance (0-62mph takes just 6.3 seconds). The engine isn't as torquey as the diesel, though, so you need to push it harder for that pace, and this doesn't suit the character of the Q5; it just doesn't feel sporty enough to justify the quick petrol unit.

Indeed, factor in the 38.9mpg official fuel economy and it's hard to recommend the petrol Q5 over the 55.4mpg diesel version. If you've got your heart set on a petrol SUV, the Audi is faster, cheaper and more economical than the 2.0-litre petrol Jaguar F-Pace - but the Jaguar is more fun to drive.