The new Audi Q5 improves an already competent package with sharper looks and new tech but can it beat the Jaguar F-Pace?

The new Q5 is strong enough in lots of key areas to be an even stronger contender in the hotly contested premium SUV class. It’s still not as involving as an X3 or an F-Pace, but it is an accomplished cruiser with a nicely finished cabin, and practical enough for most needs. We’ll hold off on a full five stars until we get full specs, including the crucial CO2 figures - but this is a very complete package, if a slightly predictable one.

The Audi Q5 has been one of the German brand’s best-selling models since it launched back in 2008. Now it’s getting an all-new generation - and Auto Express has driven a very late prototype as senior engineers gave the car the green light for production.

Due on sale at the start of 2017, with deliveries due from April, the new Q5 sits on a shortened version of the MLB Evo platform that underpins the latest Q7, and gets many of the same benefits. Chief among these is a loss of around 90kg compared with the car it replaces, helping engineers to deliver improved fuel efficiency and lower CO2 figures

This is all the more impressive given that the Q5 grows for its new generation; it’s now 4.66m long, 1.89m wide and 1.66m tall, so longer and a little taller than the car it replaces. Most significantly of all, its wheelbase grows by almost 20mm, to 2.82m; this is designed to bring real benefits in cabin space, particularly for rear-seat passengers. 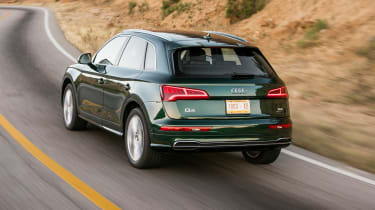 The boot also grows, though; the rear seats can move fore and aft, and the angle of the seat backs can be changed, to prioritise load space or rear legroom, but the capacity ranges from 550 litres to 610 litres - a gain of around 10 litres over the old model. Fold the split rear seats down and this space grows to 1,550 litres. As with Mercedes’ GLC, a powered tailgate comes as standard across the range; Audi will also offer the ability to open the boot by waving a foot below the rear bumper, albeit as an option.

Inside, the fascia has the latest Audi family look. The centre of the dashboard is dominated by a ’floating’ infotainment display, controlled as usual by Audi’s MMI dial between the front seats. The optional top spec system increases the screen size to 8.3 inches and incorporates a touchpad into the rotary button to allow handwriting gestures.

Audi’s Virtual Cockpit is also offered; it replaces the instrument display with a single 12.3-inch screen, and as usual, the driver can flick between a regular layout - with large dials for speed and revs - and one that shrinks those elements to prioritise the navigation map instead.

Three engines will eventually be offered on the Q5 in the UK - though only two will be available at launch. The mainstay of the range will be a 2.0-litre four-cylinder diesel engine producing 188bhp and 400Nm of torque.

The other engine at launch will be a 2.0-litre TFSI turbocharged petrol, producing 248bhp and 370Nm but returning a surprisingly respectable CO2 emissions of 154g/km. Both of these motors will be offered with a seven-speed dual-clutch S tronic transmission in the UK, and they get the latest quattro ‘Ultra’ four-wheel drive system, which disengages the rear wheels in normal road conditions to help save fuel. 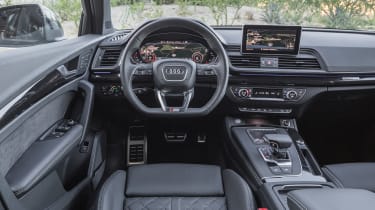 Soon after launch, a 3.0-litre V6 diesel will arrive, offering 282bhp and 620Nm of torque. It’s available only with a conventional eight-speed automatic gearbox (badged tiptronic) - and its quattro set-up is permanent four-wheel drive, because Audi has yet to engineer the new technology for six-cylinder engines.

Audi sources are pretty open about the fact that a new SQ5 is under development. It’s likely to get an even hotter version of the six-cylinder diesel, and could feature trick chassis technology like rear-wheel steering.

Under the skin, the regular Q5 gets a choice of four suspension set-ups. There are two versions of a system with conventional dampers and steel springs - regular and a more sporty configuration with stiffened springs anti-roll bars. Then you can order regular steel springs in combination with Audi’s adaptive dampers, or go the whole hog, like the cars on our Mexican test, and spec the adaptive system alongside air suspension. 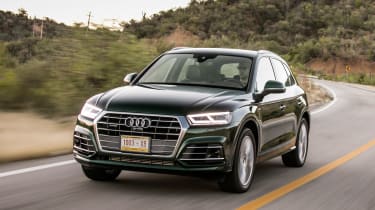 On the road the Q5 is another predictable Audi - but that’s not necessarily a bad thing in this day and age. The new 3.0-litre diesel is a strong performer. It’s a teeny bit gruff if you push really hard, but settles down very quickly when you’re up to speed; it’s pulling around 1,750rpm at 80mph, and you won’t hear it.

At that speed, in fact, overall refinement is excellent; you’re more likely to be bothered by road noise from the 20in wheels than any whoosh of air from around the door seals or the side mirrors.

• Most reliable 4x4s and SUVs

The petrol engine is pretty smooth through the mid-range, and only gets thrashy if you stick the gearbox into manual mode and decide to really rev it out. That said, even its impressive torque figure isn’t quite enough for a car of the Q5’s size, so you’ll find yourself pushing the motor pretty hard, pretty often. It’s a fair effort, but given this level of performance and the fact that the four-cylinder diesel will be much better on CO2 emissions (Audi has yet to issue a figure for it, but we’d expect it to nudge 130g/km), the TFSI will sell in tiny numbers in the UK.

The chassis compromise is best filed under ‘safe’ rather than ‘involving’. We played with the air suspension settings under Audi Drive Select and the Dynamic configuration feels the best of the lot; it was still comfortable, even on our test car’s 20in alloys, and kept body roll in check more effectively than Comfort. 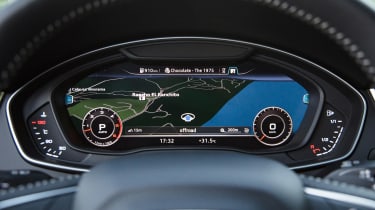 The steering has a small amount of play around the straight ahead but is generally precise enough for you to rely on it. There is precious little feedback to speak of, though. Again, the overall impression is of a clinical but accomplished driving experience, not a really entertaining one. In that respect at least, a Jaguar F-Pace is probably going to have the measure of the Q5 on UK roads - and a Porsche Macan remains in a different league altogether.

Inside the cabin, the Q5 features a lot of A4 cues, and its fit and finish are pretty much up there with the class best. There’s a reasonable amount of space for two adults in the rear, too, although the thick C-pillar means that taller individuals may need to duck their heads a little as they climb in and out.

The trim levels and specs have yet to be finalised but the Q5 will have SE, Sport and S line in its line-up. SE is likely to bring cloth seats and manual adjustment for seat height, while Sport will offer leather upholstery, a more comprehensive infotainment system and a sportier steering wheel, along with exterior design flourishes. S line will get that stiffer chassis set-up on its options list, plus sports seats and 19in alloy wheels as standard. Prices should kick-off at around £38,000 for the 2.0 TFSI engine with the 3.0-litre TDI diesel we tried opening at close to £42,000.