Stunning drop-top supercar gets V8 power, but how does it compare to its V10 equivalent? 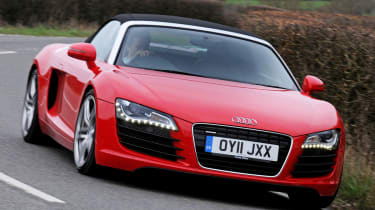 If you’re in the market for an Audi R8 this is the model that makes the most sense. The folding fabric roof is refined when in place, but adds another dimension to the drama when it’s stowed – and there’s no penalty over the coupe when it comes to handling. It might not be as fast as the V10 Spyder in a straight line, but by shedding 60kg it handles more sweetly and the eight-cylinder engine still sounds fantastic – and lets not forget the V10 commands an eye-popping £21,110 premium. Audi has delivered the complete supercar experience in an even more appealing package.

Has the R8 Spyder lost its venom? Audi’s gorgeous convertible supercar can now be ordered with a less-potent 4.2-litre V8, costing over £20,000 less than the V10 model. And we were first to find out if it’s a worthy addition to the R8 range.

Visually, you’d have to be an expert to spot the differences. Instead of the V10’s twin oval exhausts there’s now two sets of twin pipes, plus the V10 badge under the wing mirror has been deleted.

The lightweight fabric roof can be peeled back electrically at the touch of button, takes just 19 seconds and can be operated up to speeds of 31mph. A retractable rear screen which can be lowered even with the roof in place, allows your ears unimpeded access to the V8 soundtrack.

It uses the same 424bhp 4.2-litre V8 as the R8 Coupe, which powers it from 0-62mph in 4.8 seconds – seven tenths slower than the V10 Spyder – but at no point does it feel short of pace. It lacks some of the V10’s sparkle at high-revs, but the thrust on full-throttle is still astonishing and with the roof down the sound still sends shivers down your spine.

A super-stiff Aluminium spaceframe chassis makes it every bit as responsive as the V8 coupe, despite weighing 100kg more. Compared to the V10 Spyder it actually tips the scales at 60kg less, and it feels better-balanced and more athletic in corners because of it.

The steering is crisp and responsive, and having quattro all-wheel drive and rear tyres like steamrollers means the level of grip is truly astonishing – you can carry enormous speed into a corner and simply catapult out the other side.

Our test car was fitted with the standard six-speed manual gearbox, which makes a fantastic click-clack sound and you rifle through the gears. An R tronic automated manual ‘box is also available for an extra £5,310. The suspension, which uses fixed-rate dampers instead of the V10’s adjustable magnetic units, is well judged too and supple enough for everyday use.

What’s most tempting about this car though isn’t its jaw-dropping looks, engine note or agile handling, but its price compared to the rest of the R8 line-up. It costs £8,660 more than the V8 coupe, but for that you get the retractable roof and bundle of extra equipment. It also costs a massive £21,115 less than its V10 equivalent.