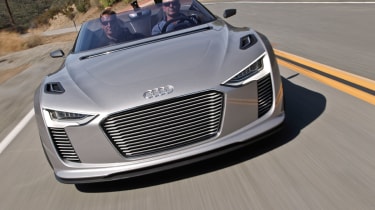 Audis are often criticised for looking like clones of each other, but you can’t say that of the e-tron Spyder. If it can make it through to production as the R4 with its striking looks intact, then half the battle is already won. The rest is down to how it drives – and on the basis of this concept and Audi’s success with the R8, we can expect it to be one of the most exciting sports cars of the future.

The e-tron Spyder is a glimpse into Audi’s future – we already know the firm is planning a mid-engined sports car to sit below the R8, and this concept gives us the best idea of how it will look. We got an insight into how it might handle, too, as we took the wheel for an exclusive drive.

The car was first displayed at last year’s Paris Motor Show, and its wheelbase is a full 220mm shorter than the R8’s. It’s only 4.06 metres long and 1.11 metres high, but a purposeful-looking 1.81 metres wide. Audi has clearly gone to a lot of trouble to make the e-tron Spyder stand out, and it’s one of the best-looking sports cars we’ve seen; the wheels for example are each made from 66 individual parts.

Climb aboard and the cabin design is simpler, but just as stylish. There’s a set of one-piece carbon fibre seats, complete with electronic adjustment, and they’re very comfortable. Hi-tech touches include ventilation controls that blend seamlessly into the dash and can be opened or closed at the swipe of a finger.

Driving the rear wheels is a 3.0-litre twin-turbo V6 diesel engine, while a pair of plug-in electric motors turn the front wheels individually. Together, they produce a total of 383bhp and a huge 1,002Nm of torque.

Not only does that mean the Spyder is capable of sprinting from 0-62mph in 4.4 seconds, but it can also run on electric power alone for around 30 miles. On our first run we were limited to the electric-only mode, and as we pulled away, the e-tron whined and hummed. But there’s a slight disappointment as you realise the car isn’t quite as quick as its looks suggest, too.

That changed when the diesel was fired into life for our second run. The twin-turbo V6 hurled the e-tron forward and, because it uses a CVT gearbox, engineers have done without the artificial gear ‘steps’ of a production car. It just revs up to the point where the most torque is and stays there while the car picks up speed.

But there’s hardly any sound-deadening, so the diesel is noisy and rough, with a hiss as the turbos kick in. The car is convincing in areas you don’t expect, though. The ride feels composed and organised, yet still gives a great feeling of contact with the tarmac, while the suspension – the front taken from the TT RS and the rear from the R8 – provides plenty of grip. But the electromechanical power-steering borrowed from the A1 could do with more feedback.

The drivetrain works so seamlessly that we didn’t notice the electric motors sending differing amounts of power to each front wheel to improve grip and handling. Most impressive of all is the fact that, despite the amazing performance on offer, Audi claims the e-tron Spyder will return 128.4mpg. That’s the same as a Toyota Prius Plug-in, and means a theoretical range of more than 620 miles from the 50-litre fuel tank.

The e-tron Spyder will inspire the new R4, but when it makes production, this diesel-electric drivetrain isn’t expected to be offered initially. Instead, Audi is thought to be looking at using the 2.5-litre turbo from the TT RS, which produces 340bhp. The car is likely to make it on to the road in 2014 as part of a platform-sharing project with Porsche, priced at around £45,000.