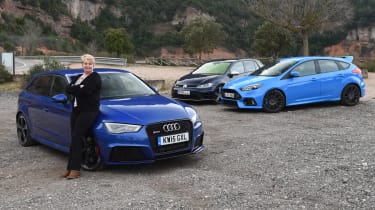 It’s not the best hot hatch on the market, and didn’t win the test we drove it all that way to take part in, but the RS3 has more character than most rivals, thanks to its unique five-cylinder engine layout. It always puts a smile on the driver’s face and is a comfortable cruiser, and we’ll miss it.

Many cars leave our fleet with nothing more than a wash, vacuum and a quick backward glance. But when our Audi RS3’s time was up, it was treated to something of a farewell tour.

Just days before it was due to depart, the fast five-door contested an exclusive road test with the new Ford Focus RS, which was taking place in Montserrat, Spain. That meant we needed to cover over 2,000 miles in less than four days.

Staff snapper Otis and myself began our journey on the Channel Tunnel. The RS3 is one of those cars that you’ll never get tired of starting up, and that was particularly true as we exited the train. The five cylinders burst into life, emitting an amazing cacophony of growling sounds that ricocheted around the carriage – it quickly made me appreciate what my neighbours had to put up with every time I’d fired up for an early a start! 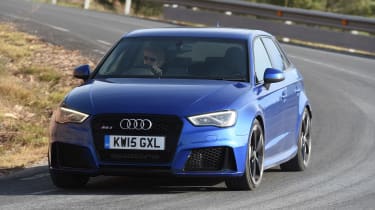 Once out on the French roads, I was struck at the difference in the sporty Audi’s comfort – on poorly surfaced British tarmac, it’s fair to say the ride is a little too firm, plus its ultra-low-profile tyres are left vulnerable to the frequent potholes. Yet on France’s smoother, well kept toll roads, the RS3 was transformed into a surprisingly relaxed cruiser.

Our car also benefited from the £795 diamond-quilted leather seats – the high backs are particularly supportive, plus the adjustable under-thigh support made our long journey much more comfortable.

Plus, I liked the fact that we didn’t need to purchase a beam converter kit for the headlights, as the RS3’s clever sat-nav works out that you’re driving in a foreign country and adjusts the beams automatically, so you don’t dazzle oncoming drivers. 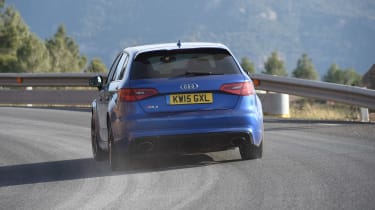 But it was along the beautifully scenic mountain roads that the Audi came into its own. Although the car was ultimately defeated in the group test, it still proved to be a thrilling driving machine. Strong grip and excellent quattro four-wheel-drive traction allowed us to scoot around the tight bends, while the engine’s explosive pace and spine-tingling soundtrack always left us wanting more.

However, this performance comes at a price: our car returned just a thirsty 25.4mpg overall. The figure did improve on the long motorway stretches, where it often crept up into the early 30s.

When we finally got back to Blighty, it was with a heavy heart that I finally waved goodbye to the Audi. It might not be the best hyper hatch, plus it’s expensive to buy, but the RS3 is fast, fun and powered by one of the finest engines ever. 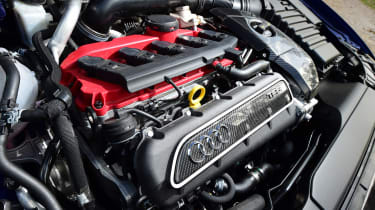 I haven’t put paint brush to canvas since my school classes over 20 years ago, but there’s something about our Audi RS3 that made me want to dig out the easel. Yet it’s not the muscular lines or bright Sepang Blue paintwork that are the works of art – it’s the 2.5-litre five-cylinder engine.

Unlike my haphazard brushstrokes, this remarkable powerplant is a real masterpiece that helps the RS3 to stand out from the growing crowd of hyper hot hatches.

With more than 7,000 miles on the clock, the turbocharged powerhouse is performing better than ever and sounds fantastic. It’s responsive at any speed, but once the needle on the rev counter swings past 3,500rpm, the engine really gets into its stride and catapults the Audi along at an alarming rate. 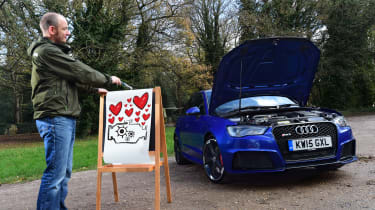 Yet it doesn’t just go well and sound good. Lift the RS3’s bonnet, and you’ll discover the TFSI engine looks the part, too. While most modern units are hidden away under vast and featureless plastic shrouds, the RS3’s is displayed in all its naked glory. And it’s clear Audi has made sure the engine is attractive, with an eye-catching red-finished cam cover.

If you want to lavish even more attention on the oily bits, then you can add the £495 Carbon engine cover that’s fitted to our car. It uses the lightweight material as a surround for the oil filler cap; and as a neat embellishment for the prominent inlet manifold at the front of the bay, it makes the area under the bonnet look even racier.

Of course, there are aspects of the engine that are less desirable, such as the noisy start-up from our car’s optional sports exhaust. The twin tailpipes’ evocative howl may be brilliant at full chat on a deserted B-road, but their window-rattling bark in the morning is making me increasingly unpopular with my neighbours. And then there’s the car’s thirst for unleaded. 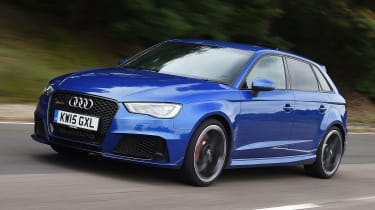 Drive the RS3 as intended, and the five-cylinder will guzzle a gallon of fuel every 20 miles or so. Yet even if you exercise a little restraint, the trip computer read-out will rarely climb above 30mpg. Okay, so I know the Audi is a serious performance car that incurs higher-than-normal running costs, but combine this thirst for petrol with the small 55-litre tank, and you’ll barely get 250 miles between fill-ups.

Still, thanks to the characterful engine, you can savour every one of those miles. The ride is a bit firm and the handling feels inert when compared to the likes of Ford’s Focus RS, but that muscular and musical 2.5-litre unit makes up for any disappointment. And if the tank does run dry, I can always heave open the bonnet and enjoy the artwork. 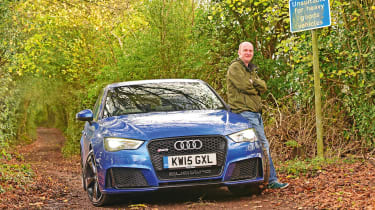 Welcome to quattro country. With winter in full swing, the narrow lanes surrounding my Hertfordshire home are covered in fallen leaves, thick mud and deep puddles. These slippery and unpredictable conditions would force most high-performance cars to hibernate until spring, but they’re tailor made for our four-wheel-drive Audi RS3.

Under the car’s eye-catching Sepang Blue paint is a sophisticated Haldex-controlled all-wheel-drive transmission that can send torque to the axle with most grip in a fraction of a second. As a result, the RS3 can seamlessly adapt to the available grip, keeping you on the straight and narrow where two-wheel-drive rivals start to get unruly.

Even on the dirt-slicked road you see in these pictures, the Audi is able to put down its incredible 361bhp and thumping 465Nm of torque with virtually no fuss. Press the throttle pedal as hard as possible and there’s the occasional flash from the ESP light on the dash, plus a slight pause as the power is shuffled around, but then the Audi simply hunkers down and flies. Switch the ESP to Sport mode and the transmission is primed to react even more quickly, sending up to 100 per cent of the torque to the rear axle for even more agile handling. 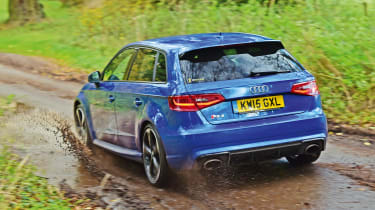 This impressive traction inspires confidence, allowing you to press on where other hot hatches need to tread carefully. Better still, the scintillating straight-line performance is matched by arresting braking power. The massive 370mm-diameter cross-drilled front discs are clamped by eight-piston calipers that slow the RS3 with eye-popping force.

Even the wide Pirelli P Zeros cope well, biting hard where you’d expect a little slip. However, the ultra-low-profile rubber is vulnerable to pothole damage, as we found after one crater in the tarmac left us with a puncture that couldn’t be fixed.

Ultimately, the Audi isn’t as fun to drive as some rivals, yet when the weather turns nasty I’m happy to trade thrills for some four-wheel-drive peace of mind. And it’s not just the car’s traction that’s taking the strain out of the change in seasons. 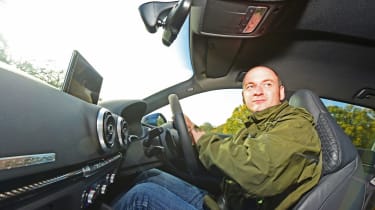 The standard LED headlamps have really come into their own on gloomy evenings. Even on dipped beam, they cast a brilliant white light that makes it easy to pick out pedestrians in the shadows. Hit full beam on a dark lane and you’d swear the car had been fitted with a powerful rally car lamp pod. Factor in the five-cylinder soundtrack and four-wheel-drive grip, and it’s as if you’re tackling a Wales Rally GB stage!

So, it sounds like it’s all been plain sailing for the Audi, then? Not quite. While waiting in a queue of traffic recently, the stop/start killed the engine as normal, but it refused to fire up again once I lifted off the brake. I tried turning the engine over manually using the key, but still it didn’t respond. For about 10 minutes the RS3 sat stranded, before finally bursting into life as if nothing had happened.

The issue hasn’t reappeared, but I’ll book the car into a dealer for further investigation. Hopefully it won’t be serious, as I don’t want anything to cool my warm feelings towards this high-performance winter wonder. 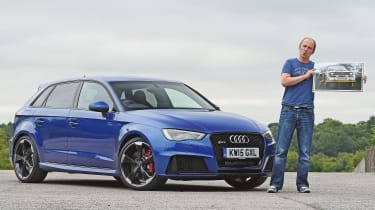 When I was a boy, my bedroom walls were plastered with various car posters, but it was the one of the fearsome Group B Audi Quattro S1 E2 that I’d stare at and long to drive the most. With its wild wings and flame-spitting exhaust, the 600bhp monster fuelled my obsession with rallying.

Thirty years on, my dream has come true... sort of. Okay, so our new Audi RS3 isn’t a hand-built motorsport missile designed to conquer rally’s rough and tumble, but it has more in common with the S1 than you’d think. For instance, both cars are powered by a five-cylinder turbo engine paired with a quattro four-wheel-drive system.

Plus, Audi’s mid-eighties rally weapon served as a test bed for its then-novel twin-clutch gearbox, which helped pave the way for our RS3’s seven-speed S tronic. Then there’s the power. The final S1 E2’s 600bhp output was a high watermark for Group B rally cars, while our model’s 361bhp figure makes it the most powerful hot hatch around. 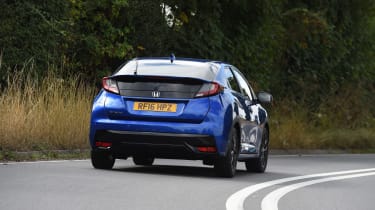 The cars even sound similar. That’s largely thanks to the sports exhaust that comes with the £2,495 Performance Plus Pack, and includes adaptive dampers and a raised top speed of 174mph. At idle, the Audi’s twin tailpipes emit a deep burble, but as the revs climb past 4,000rpm, the 2.5-litre engine delivers the same howl that sent shivers down the spines of eighties rally fans.

Inside, we’ve specified the £1,150 Comfort and Sound Package for a Bang & Olufsen stereo, cruise control and ambient lighting, plus the leather seats get a £795 diamond-stitched finish. The £1,795 Technology Pack adds an HDD sat-nav with Audi’s MMI Touch system that allows you to write an address with your finger. 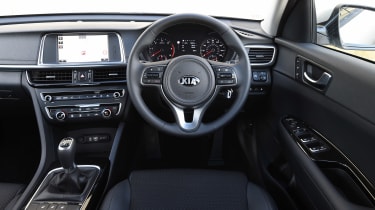 Well, the Audi looks and feels the part, with the interior using high-grade materials. Then there’s the performance. Audi claims the RS3 will sprint from 0-62mph in just 4.3 seconds – and it feels that fast in the real world, too.

Any niggles? It turns out that squeezing in a five-cylinder engine doesn’t leave much room for a battery. So, Audi has had to relocate it to the boot, thus reducing capacity to a cramped 280 litres. Oh, and even with the dampers in their softest setting, the RS3 has a very firm ride.

Still, I’m not going to let these issues spoil my enjoyment of this fast and unflappable car, and over the coming months I’ll be finding out whether it deserves to share wall space with its legendary ancestor.