Quattros new and old meet head-to-head to mark 30 years of the famous badge. 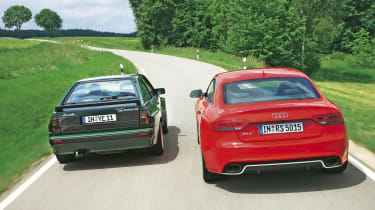 There’s no better way to travel swiftly and safely than in an RS5. With its 444bhp 4.2-litre V8, hi-tech all-wheel-drive transmission and muscular styling, it’s a fitting way to celebrate the Quattro’s 30th birthday. However, when placed next to the maddest Audi coupé ever, it seems sanitised! The Sport Quattro’s quirky short-wheelbase styling, lightweight construction and sledgehammer turbocharged engine give it huge amounts of character – but ensure it’s not a car for the faint-hearted. Here’s to another 30 years of high-performance Audis.

It’s beauty vs the beast! Audi’s quattro technology has come a long way since it burst on to the scene in the Eighties, when it immediately rewrote the rule book for road and rally cars. In celebration of 30 years of all-wheel- drive dominance, we’ve brought together the latest and greatest of the quattro breed – the RS5 – and the 1984 Sport Quattro.

These two 4x4 fliers are the products of completely different eras, but they have more in common than you might think. Both are based loosely around run-of-the-mill coupés – the RS5 uses the A5 as a donor, while the Sport Quattro can trace its roots back to the Audi 80 Coupé.

Based on the original Quattro from 1980, the Sport Quattro was created by chopping the wheelbase by 320mm – so removing a huge section from the middle of the car. Rear legroom disappeared, but the trade-off was sensational handling and reduced weight. The five-cylinder engine gained some additional power, too, hitting more than 500bhp in the S1 Group B rally car, and 302bhp in the rare and expensive roadgoing version you see here.

The Sport Quattro, on the other hand, is unmistakable from any angle. Primarily it’s the shortened wheelbase – which changed the car’s profile from a classic coupé to something more like a hatch – that gives the model its unique stance. However, designer Peter Stevens (who went on to pen the McLaren F1) did not stop there.

A trio of vents on the bonnet’s leading edge have become the car’s trademark, while enlarged grilles feed the engine with more air, and the arches are flared. Back in 1984, the Sport Quattro broke new ground with its four-wheel-drive, ABS and self-locking diffs. Yet technology has changed beyond recognition since – and the RS5 is a shining example.

A new centre ‘crown’ diff means up to 85 per cent of the power can be sent to the back tyres, although the default setting is 40:60 front-rear. Torque vectoring can shuffle power around to the wheels with the most grip. To add even more bite in bends, our model was also fitted with the optional rear sport differential.

Audi’s Drive Select system lets you precisely customise the car’s responses – steering weight and throttle, diff and box sensitivity – while Dynamic Ride Control constantly adjusts suspension parameters based on driving conditions. And it’s not only the list of gadgets that’s grown in 30 years: the RS5 gains three more cylinders and 142bhp from its 4.2-litre V8 engine.

Incredibly, though, thanks to a kerbweight of only 990kg compared to the RS5’s portly 1,725kg, it’s the old-timer that easily eclipses the newcomer when it comes to power-to-weight ratio: 309bhp/tonne and 257bhp/tonne respectively.

Prod the Sport Quattro’s throttle and there’s a pause before the turbo spools up and the car leaps forward with lightness and agility. The faster you go, the more the steering comes alive, but the short wheelbase and four-wheel drive make it a physically demanding experience to drive fast – yet no less fun for it.

The RS5, on the other hand, is a piece of cake. The light steering requires minimum driver effort but lacks the Sport Quattro’s detailed feedback, while the optional carbon-ceramic discs wipe off the speed quicker than the car piles it on.

Despite the Sport Quattro’s motorsport roots, it’s the RS5’s suspension that feels stiffer and keeps the car flatter in bends – although the adaptive dampers mean it never feels harsh.The RS5 takes a more clinical approach to performance. Its traction and outright speed are phenomenal, as is its exhausts’ earth-shaking rumble, but somehow the raw motorsport DNA present in the Sport Quattro is missing. They just don’t build them like they used to...