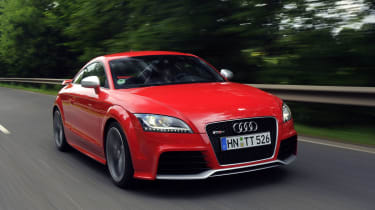 Is the spirit of the original Quattro alive and well in the new TT RS? Well, it’s a stunningly fast, grippy and characterful sports car – but it’s the new five-cylinder turbocharged engine that dominates the experience this time round, rather than the handling. The 2.5-litre TFSI unit provides phenomenal performance and an amazing soundtrack – especially in Sport mode! When the road gets twisty, the TT RS shows amazing traction, composure and security too, even if it’s not quite as fun as other Audis such as the now legendary RS4 or current R8. But it’s still an excellent sports car and a worthy flagship for the TT range.

IT’S the mightiest TT ever – and we’ve driven it! This is the stunning new RS version, which has been inspired by Audi’s legendary Eighties road-going rally car, the Quattro.

Like its spiritual predecessor, it features a five-cylinder turbocharged engine, but the all-new 2.5-litre TFSI unit boasts 335bhp – the original Quattro mustered 'only' around 200bhp by comparison. Add in sports suspension, quattro four-wheel drive and huge brakes, and you've got a real recipe for excitement.

Priced from £42,985 for the Coupe and £44,885 for the Roadster version, you’d hope that the RS stands out from more regular TTs. And it does. In comes a set of R8-style front air intakes, 18-inch alloys and larger twin chrome exhaust pipes. However, the fixed rear spoiler looks rather aftermarket – thankfully, you can specify a more discrete pop-up version if you want.

Inside, there are sports seats clad in Silk Nappa leather, aluminium pedals and a chunky flat-bottomed steering wheel complete with RS badging.

Twist the key and the new engine fires up with a bark from the twin exhausts. And it’s clear from the off that it’s a very special unit. First of all, it boasts amazing flexibility, thanks to a torque peak of 450Nm, which arrives from just 1,600rpm right up to 5,300rpm.

Together with that deep-chested mid-range urge, there’s neck-snapping top-end punch too – with 335bhp available from 5,400rpm all the way to 6,700rpm. Indeed, with a 0-62mph time of 4.6 seconds and storming in-gear pace, it feels every bit as quick as a V8-engined R8.

If anything, though, the sound is even more of a highlight. There’s a lovely off-beat warble, reminiscent of the original Quattro, but it’s supremely smooth. There’s a sport button too, which as well as sharpening throttle and steering response, opens up baffles in the exhausts. The result is very loud – with even more bass at low-speed and a metallic zing at high-revs.

Around corners the TT RS grips hard – so hard that it’s difficult to get near its enormous limits. Eventually it will understeer but a lift of the throttle will see it tighten its line keenly yet safely. Unlike the R8 and much-missed RS4, its quattro four-wheel drive system isn’t rear-biased, so the TT RS isn’t quite as much fun – and despite heavier and more precise steering than a TT S, the wheel doesn’t brim with feel, so a Porsche Cayman still edges it on driver appeal.

But it’s still hugely capable – and highly desirable. And thanks to that characterful engine, it’ll still put a huge smile on your face.