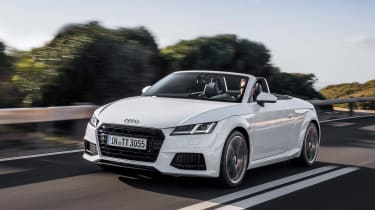 Although it lags behind the petrol models in terms of straight-line performance, the diesel TT has plenty of other things going for it. Low running costs are top of that list, plus it delivers punchier in-gear performance than the numbers suggest. It’s just as stylish inside and out, too, and will handle well enough for all but the most hardcore driving enthusiasts. If you want to look good for less, the Audi TT Roadster Ultra is a great choice.

Just a few years ago, the idea of a diesel-powered convertible sports car was laughable, but now it’s all the rage. Don’t get us wrong, we’d probably all rather have a high-revving, sweeter-sounding turbocharged petrol engine under the bonnet of a new TT Roadster, yet it’s hard to ignore the the new 2.0 TDI Ultra model’s economy and emissions.

With 181bhp and 380Nm of torque from its four-cylinder turbodiesel, it’s eight per cent more powerful than the old TT TDI, while figures of 65.6mpg and 114g/km represent a massive 26 per cent improvement. And that’s great news for company car buyers, who pay a Benefit in Kind rate of just 18 per cent (it’s 24 per cent for the 2.0 TFSI).

A sports car shouldn’t be just about numbers, though, and the TT Roadster is a car Audi wants you to buy largely with your heart rather than your head. 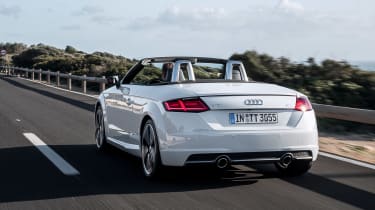 It certainly looks the part, especially in S line trim with its huge 19-inch alloys, deeper bodywork and LED headlights as standard. The interior is even better with its 12.3-inch Virtual Cockpit and climate controls set within the air vents.

Drop the well insulated roof behind your head in 10 seconds, and the slight clatter from under the bonnet gives away the fact that this TT is a diesel, but on the move there’s still plenty of fun to be had. It’s only available with front-wheel drive and a manual gearbox (to maximise fuel economy), and is a full 1.7 seconds slower from 0-62mph than the 227bhp 2.0 TFSI, but it never feels sluggish.

As with all good diesels, it punches hard in the mid-range and the power band isn’t as narrow as you might think. In the dry, driven at seven-tenths, you’re unlikely to miss 4WD, but in the wet the front tyres can scrabble around and understeer in bends. Still, overall there’s a precision and delicacy to the controls that lets you make swift and satisfying progress. 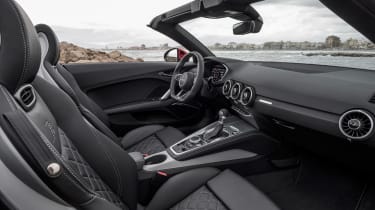 Our only gripe is with the manual box. It has a light action, but the lever feels a little long and the action a bit baggy for a sports car of this calibre.

There’s also the sense that the nose bobs around more on uneven surfaces, due to the extra weight – but ultimately we’re splitting hairs. If you’re someone who plans to use their TT every day, with the odd top-down blast now and then, the fuel-sipping diesel makes a lot of sense.