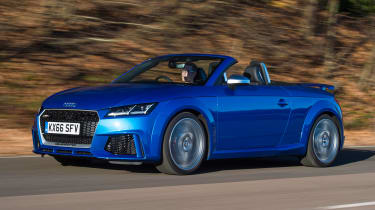 The latest Audi TT range shares much of its engineering hardware with other Volkswagen Group cars under its modular MQB Platform, so there’s been plenty of opportunity to shake out any reliability issues. The TT RS uses a new five-cylinder TFSI engine and is quite highly-strung, but lots of its technology has been seen before and we expect it to be robust. We ran a TT test car on our fleet when it was first released, and had some issues with the electrical system – in particular the Virtual Cockpit – but the passage of time has likely allowed Audi to sort any long-form issues. Otherwise, the build and material quality of the TT appears flawless inside and out.

The TT also only has a four-star safety rating from Euro NCAP, missing out on the fifth star primarily because Automatic City Braking isn’t available. Occupant crash safety ratings of 81 per cent for adults and 68 per cent for children. The BMW 1 Series (on which the rival BMW 2 Series Coupe is based) scores 91 per cent and 83 per cent.

Auto braking aside, the TT does come with plenty of safety tech, including blind spot monitoring, lane-keeping assistance and speed limit recognition. The TT hasn’t figured in our driver power survey, but Audi trails some way behind BMW in the ‘best manufacturer’ category of our 2017 Driver Power Survey – although it’s a few places ahead of Mercedes.

All Audi models come with three-year warranty capped at 60,000 miles, which these days is nothing much to write home about. Porsche and BMW also offer three-year cover, but don’t limit your mileage.

Servicing a TT RS is likely to cost more than a regular TT, but there are fixed-rate plans to help with the cashflow. Remember you’ll likely spend more on consumables like brake pads and tyres at service times, too. 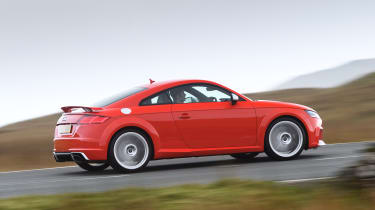 Click on the gallery above to see more of the Audi TT RS...