Auto Express hits the road in Bentley's all-new Continental GT as it bids to be crowned world's most luxurious supercar. 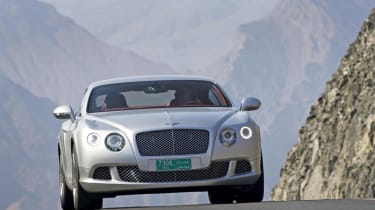 The Continental GT has always been a fine car – but the latest generation is better in every way. It oozes class, and provides massive pace and huge road presence.  Beautifully styled, the Continental GT is growing up gracefully. We would caution that we did have minor concerns about the stiffness of the suspension, and the level of steering feel on offer. However there is no doubting the accessibility of the W12 engine’s performance, or the straight-line traction offered by the four-wheel drive system. In all, there can be few better ways of proving you have hit the jackpot! What's more, We can’t wait for the all-new 4.0-litre V8 model, which Bentley’s engineers promise will be something really special.

Less is more, so the saying goes… With a lower kerbweight and a slimmed-down design the new Bentley Continental GT is officially described as the world’s most comfortable and luxurious supercar.

And for the first time ever, you will also be able to buy it with a new V8 engine. Though the W12 version will still be available – and is tested here, the smaller unit is predicted to be the bigger seller, thanks to its lower CO2 emissions and improved fuel economy. It arrives a couple of months after the launch of the new car – later next year.

On the road, the 567bhp twin-turbocharged 6.0-litre W12 effortlessly propels the two-plus-two seat coupé from 0-62mph in 4.4 seconds, and on to a top speed of 198mph. Four-wheel drive offers incredible traction particularly out of tight corners.

To improve this further still, power is split with a 40:60 bias to the rear, allowing you to really make the most of the incredible torque on offer.

And from behind the wheel it feels every bit as fast as those figures suggest – something that’s made even more special by the fact that the GT lives up to its promise of comfort and luxury with a leather clad, hand assembled cabin that’s whisper quiet at motorway cruising speeds.

We like the new design – which has helped cement the Continental’s place in the Bentley family by adding a real sense of heritage to its appearance. It carefully preserves its predecessor’s graceful silhouette but improves it with crisper, sharper lines and jewel like detailing for the front and rear lights.

But it’s not just the new look and performance of the powerful W12 engine that mark this car as a step forward. Under the skin there have been significant changes to the chassis and floorpan, as well as the computer controlled air-suspension and six-speed automatic gearbox.

Although the wheelbase remains the same – at 2,746mm – there’s more space inside thanks to redesigned front chairs. Thinner seat backs liberate an extra 46mm of legroom for rear seat passengers. According to Bentley, it’s now more spacious in the rear than Aston Martin’s four-door Rapide…

Likely to cost from £135,760 when it arrives in showrooms in the first quarter of 2011, it even represents a value for money of sorts – particularly when you measure this cars performance against rivals like the Aston Martin DB9.

The weight saving over the previous model is however less impressive. Tipping the scales at 2,320kg, it’s just 65kg lighter than its predecessor, with over 35kgs of that saving delivered by the thinner front seats!

The net result of the myriad of changes is not easy to describe in just a few sentences. However, the overriding impression is that this car feels more robustly engineered, and the chassis has a greater feeling of strength and rigidity than the previous model.

It accelerates very smoothly, thanks to the changes made to the gearbox, while upgrades to the suspension deliver greater definition between its four selectable modes – from comfort to sport.

Steering responds immediately to the driver – particularly impressive given this car’s bulk, and there’s very little bodyroll. Large undulations in the roads are well contained by the self-levelling suspension – and the car is not easily ruffled by large, mid-corner bumps.

But if you are sensing there’s a “but” still to come then you would be right.

There’s no doubt that the new model now feels like a fully fledged member of the Bentley family, but there are still questions that remain unanswered by this early drive.

We drove a car fitted with 21 inch wheels, and on broken surfaces we thought the suspension felt a little too firm even in its softest setting – particularly from the passenger seat. We would like to try a car on smaller, lighter 20 inch wheels to find out if this is still the case.

From the driver’s seat, we would also level criticism at the apparent lack of steering feel on offer. Though the system is very accurate, turning into fast corners at speed can be an intimidating experience such is the level of faith required that the grip you will require is actually there…

In fairness to Bentley, the ultra-smooth roads of our test route are likely to have some impact on this – but an area of the car’s performance we look forward to judging again once the car is in the UK.