VW Group technology should help to keep Bentley’s Bentayga on the road, and you safe if you fall off it…

Bentley doesn't feature in our Driver Power satisfaction surveys due to its low sales volumes, but as the brand has an emphasis on bespoke customer service and a network of 25 carefully selected dealers, owning and running one of its cars should be a pleasure rather than a pain.

The revised W12 has been well proven in other models, while much of the Bentaygas structure and electronics are shared with the Audi Q7  – so we wouldn’t expect too many reliability or durability problems. Certainly the car feels extremely solidly put together. 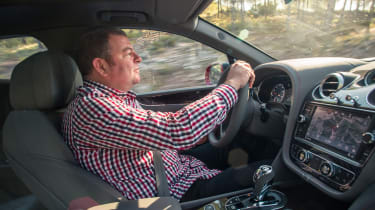 While sharing steering wheel controls with an Audi may not be quite what some owners expect from their Bentley, the VW Group technology sharing philosophy is definitely beneficial in relation to the Bentayga’s extensive roster of safety kit. The new Bentley comes with eight airbags, stability control and tyre-pressure monitoring. You’ll have to pay extra for items like adaptive cruise control and a surround-view camera – both are standard on the top-spec Range Rover.

While independent crash-test assessor Euro NCAP is unlikely to get its hands on a Bentayga any time soon, they have crash-tested the Audi Q7 SUV and certified it as a five-star car. There seems little doubt the Bentayga should perform as well as its Audi relation under similar circumstances.

The Bentley Bentayga comes with the marque’s standard three-year/unlimited mileage warranty, which is pretty much par for the course in the luxury sector. The Range Rover has similar cover, although Rolls-Royce offers four years on its new cars, and also has a new 4x4 SUV model on the way.

The Bentayga has 10,000-mile service intervals, or annual services if you don’t drive it that much. You can expect to have to shell out a fair chunk to get that stamp in the service record too, as other Bentleys in the line-up are offered with a two-year service package costing £2,000.