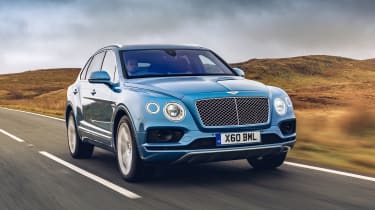 In terms of low speed smoothness and refinement, a hybrid system feels completely appropriate for the Bentayga. In everyday use, it’ll allow for emissions free driving and could cost mere pennies to run - even if that’s unlikely to be of particular concern to most Bentley owners. However, as a performance SUV, it can’t impress like the previous diesel model did.

This is the new Bentayga Hybrid: the first petrol-electric Bentley and a car that forms part of a plan that’ll see the Crewe-based brand electrify every model in its range by 2023.

This isn’t the first ‘fuel efficient’ – a term we use advisedly – Bentley Bentayga; the firm briefly launched (and subsequently dropped) the deeply impressive V8 diesel back in 2018. So, if you’re after a fuel-sipping upmarket SUV, can the Hybrid fill the void?

The new hybrid system sees the Bentayga’s cylinder count drop lower than any Bentley since 1958; the primary source of power comes from a 3.0-litre turbocharged V6 petrol engine. On its own, it makes 335bhp and 450Nm, but it’s backed up by an electric motor that gives an extra 126bhp and 350Nm. As a result, the total output delivers a much more Bentley-like 443bhp and 700Nm. Those figures are still 99bhp and 70Nm shy of the V8-engined petrol Bentayga, mind.

With a 17.3kWh battery slotted beneath the boot floor, the Hybrid’s 2.6-tonne kerbweight is a couple of hundred kilos up on the V8 petrol, too. The less favourable power-to-weight ratio means that the 5.5-second 0-62mph time is a second slower than the petrol’s, and seven tenths off the diesel.

So it’s a slower, heavier Bentayga. But does this drivetrain feel fitting of a Bentley? In many ways, yes; a quick prod of the starter button greets you with the sound of silence – and there’s nothing more luxurious than refinement. Nudge the gear selector into Drive, and the car glides away on battery power alone. It feels completely serene from behind the wheel, helped by the fact that the mapping for both throttle and brakes are so well sorted that it’s easy to drive with a chauffeur-like smoothness. 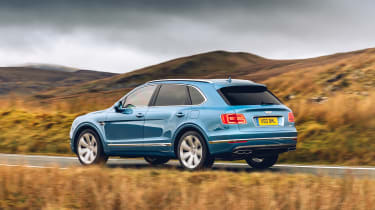 A power meter is integrated into the lower arc of the beautiful analogue tachometer, and a firmer squeeze of the right foot sees it twirl around into the combustion segment of the readout. At this point, the engine fires into life, though this itself is barely perceptible, as the V6 is so muted at low revs.

It’s no slouch, but the Bentayga Hybrid does lack the relentless surge of acceleration found on other current Bentleys. As with other plug-in hybrids, there’s a noticeable delay between flooring the throttle and the engine firing up, causing slight hesitation before the full force of acceleration hauls the Bentley to the horizon.

This can be mitigated by twirling the drive select dial into Sport mode; here the engine never switches off, preparing the car for more enthusiastic driving. As with any other Bentayga, there’s also Comfort, Custom, and the recommended Bentely modes, but the it’s the Hybrid setting that offers three new battery management settings.

EV Drive runs in pure electric mode until the battery is depleted. Hold retains the battery charge at its current level, and Hybrid leaves the car to its own devices. Programme a destination into the navigation system, and the car will calculate the most efficient use of petrol and electrical energy along the route.

The Bentayga Hybrid is charged up much like any other current PHEV. Using a 7kW charger, it’ll top up the electricity back to full in two-and-a-half hours. From a three-pin plug, it’ll take three times that. Bentley claims a 24-mile WLTP electric range, which falls some way short of other, cheaper PHEV models like the BMW X5 xDrive45e.

Under the skin, the Bentayga uses the same platform as the Audi Q7 and the Lamborghini Urus. The model we drove was equipped with winter tyres, undoubtedly altering the ride and handling slightly. But our previous encounters show that the Bentayga feels a little more sporting than a Range Rover; it hides its mass exceptionally well – if not quite so effectively with that bulky battery pack out back. 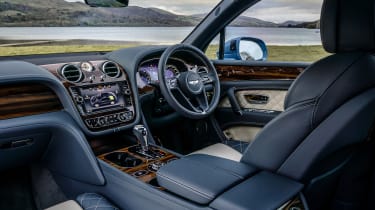 It’s not as impressive to drive as the old diesel, though: it neither feels as rapid – nor does it sound as exciting. The Hybrid has the potential to be more frugal though, particularly if you spend much of your time on EV power. On our test route – which started with roughly three quarters battery charge and three occupants on board – we averaged fuel economy in the low forties. That figure would definitely drop on a motorway run, but it’s better than you could ever expect to get out of the diesel.

But once you sit inside you couldn’t really care less what’s powering it. Bentley arguably make the best car interiors of all, and the Bentayga Hybrid is no exception. The stitching is impeccable, the detailing is wonderful, and each hand-crafted wood veneer looks immaculate. Elsewhere, there’s a huge amount of rear legroom, and the 484-litre boot volume is unchanged from traditional combustion-engined models.

There is one other factor that the Bentayga Hybrid has on its side, and that’s price. It’s unusual for a car fitted with complex hybrid systems to be the most affordable model in the range, but with prices starting from £133,100, it’s actually six grand less expensive than the V8 petrol.

However, it’s also possible to buy a Range Rover Hybrid from just under £90,000. It’s slower than the Bentley, though, and nice though its cabin is, it just can’t compete with the Bentayga’s glorious craftsmanship. Either way, if the decision over whether or not that’s worth the extra is one you’re in a position to make, then we’re more than just a little bit envious.