Monstrous performance is the Bentayga’s most obvious strength, and it handles like a car half its size

In a bid to ensure its first SUV is up to scratch from behind the wheel, Bentley has tapped into the vast off-roader knowledge bank of owner Volkswagen. The Bentayga is based on the same MLB architecture as the Q7 and next-generation Cayenne, so composed and agile handling should be standard.

There’s barely any wind noise, and the air-suspension’s soft ride means it handles bumps with supple composure, although broken surfaces send a shudder through the cabin as is typical with air set-ups.

In a corner, however, the Bentley responds with the poise and agility of a car half its size. You can choose from Comfort, Bentley, Custom and Sport driving modes, and in the latter, the air springs tense up, plus the Dynamic Ride roll control function keeps the car remarkably flat and stable. Yet our car struggled when braking hard. The combination of torque vectoring and the hefty 2,440kg kerbweight meant the all-disc set-up wilted under the exertion of even moderate use. 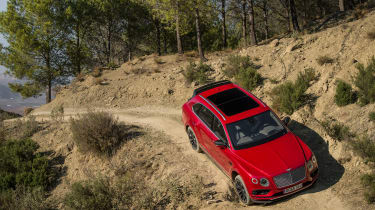 Turn off the beaten track and the Bentayga will take some serious mud-plugging in its stride. It’s not quite as accomplished as a Range Rover, but the combination of variable ride height, sophisticated four-wheel drive and hill descent control allows you to explore places few other luxury cars can reach.

Keen drivers are best served by the Bentayga V8 – it sounds suitably characterful, offers huge performance and – thanks to a 25kg weight saving over the W12 – feels a little lighter on its feet through corners. The ZF eight-speed automatic is slick, yet allows for very fast shifts in manual mode. It's not all about performance though – at a cruise, the V8 can shut down half of its cylinders to help save fuel on the motorway.

The cheapest and slowest car in the range is the Bentayga Hybrid – acceleration is yawning by Bentley standards (5.5 seconds to 62mph) but still more than fast enough for everyday driving. Refinement is serene at low speeds in fully electric mode around town, but the V6's strained engine note at higher speeds isn't entirely in-keeping with the Bentley's character. It's still the best choice if you live in an urban area and can keep the battery topped up, however.

It’s the Bentley’s twin-turbo 6.0-litre W12 that’ll grab your attention first. Boasting an eye-popping 600bhp and 900Nm of torque at just 1,350rpm, it bestows on the Bentayga amazing performance. In our test, the quick-shifting eight-speed auto box helped it sprint from 0-60mph in just 4.1 seconds, which is one second faster than the supercharged V8 Range Rover we tested it against. Yet in other respects, the W12 is a model of unflustered refinement. It’s near silent at idle and when cruising, while pushing hard only results in a muted growl.

Those that opt for this engine also have to choice of fitting the largest carbon ceramic brakes the company makes on 20-, 21- or 22-inch wheels - an option unique to the V8 petrol.