Undeniably ostentatious inside and out, the Bentayga is crammed with high-tech features, too

While the unashamedly bold Bentayga won’t be to all tastes, there’s no denying the imposing newcomer attracts attention. The raised ride height and boxy SUV proportions will be unfamiliar to fans of the brand’s traditional coupés, convertibles and saloons, but the new creation is recognisably a Bentley.

At the front, you’ll find the trademark rectangular mesh grille that’s flanked by a pair of large circular headlamps, while looking down the sides reveals large, squared-off wheelarches that take their cues from the Continental GT coupé. Move around to the rear and you’ll spot the Mulsanne-inspired tail lamps and chrome number plate surround.

Climb into the Bentayga and you’re immediately struck by the opulence of its handcrafted cabin, but it’s not perfect. For instance, the cup-holders are made from cheap plastic. Plus, the cabin lacks the airy and spacious feel of the Range Rover – take the luxury fittings out, and you could be in a Q7 or Porsche Cayenne. Even so, the combination of lustrous wood trim, soft leather and cool metal inserts gives the interior a cosseting club-class atmosphere, while the exquisite fit and finish lifts the Bentley above mainstream premium machines. 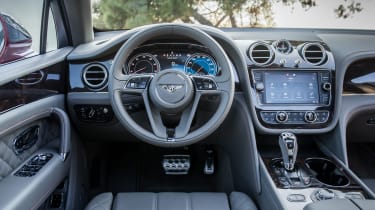 Look beyond the old-school luxury, though, and you’ll discover plenty of cutting-edge kit, such as an intuitive eight-inch infotainment system that dominates the centre console. As you’d expect with a car costing over £160,000, it comes crammed with standard kit, including sat-nav, WiFi, soft-close doors, a panoramic roof and LED headlamps.

Of course, it is possible to personalise your car with bespoke wood veneer and leather finishes. Plus, you can add extras such as the £4,520 All Terrain spec, which brings underside protection and a surround view camera, or the £5,900 Touring Specification that bundles together safety kit such as adaptive cruise control, lane keep assist and a head-up display.

Somewhat fittingly, Bentley claims its optional 1,920-Watt 21-channel Naim audio system is the most powerful available in any production SUV. There are 20 speakers dotted around the cabin, including a 300-Watt sub-woofer, and a pair of super-tweeters to produce the widest frequency range ever experienced in a car, Bentley claims. In practise, the sound system seems to deliver on its promise – it's a must-tick option, if you can afford the lofty asking price. 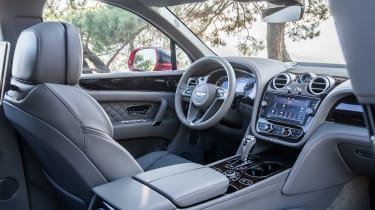 The fully-featured 8-inch touchscreen for sat-nav, systems and comms has a 60Gb hard drive, and is supplemented by a head-up display. It's based on previous-generation VW Group foundations, however – the more sophisticated system found in the Continental GT puts the Bentayga's to shame.