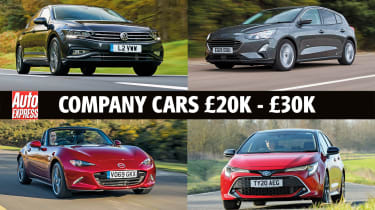 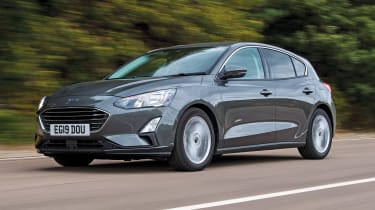 Like its little brother, the Fiesta, Ford’s Focus is one of the most popular hatchbacks in the UK and has been for some time. It’s strong in so many areas – practicality, efficiency, performance, comfort, style – and all for a very decent price.

The EcoBoost engines are solid, too, but the 123bhp 1.0-litre unit is the pick of the bunch. It’s got just enough power, so the car never feels slow, and it fades into the background when settled into a motorway cruise. Officially, it’ll hit up to 51.4mpg too, while the downsized turbo unit delivers relatively low CO2 for low company car tax bills.

Meanwhile, the steering is sharp, the handling class-leading, and the ride refined. Here the Focus really excels.

Our only slight criticism of the car is of its uninspiring interior. However, our preferred ST-Line trim addresses this to some degree, with red stitching and an aluminium gearknob, better reflecting the car’s sportier approach. 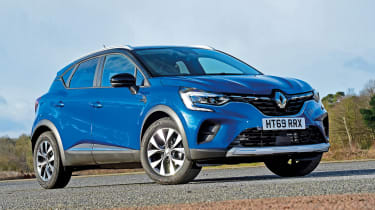 For a car that only costs a smidge over £20,000, the Renault Captur has remarkably few faults. This new model is more stylish than before, making it a more premium and practical car, and its ride comfort is good.

It’s an easy-going, affordable SUV for business users. The 1.0-litre engine feels a little underpowered so we’d go for the more capable 1.3-litre unit with a six-speed manual ’box. The official figures point to fuel economy just north of 40mpg, and we’ve found you’ll match this in the real world. Plus fair CO2 emissions and a P11D price below its rivals’ mean low BiK costs.

However, that lower price doesn’t mean you have to compromise on kit. Standard features on Iconic trim include a seven-inch touchscreen, cruise control, LED lights, rear parking sensors and sat-nav. If you can afford it, the Signature Orange Pack adds a splash of colour inside too, but even the standard cabin is well built, roomy, and feels pretty high-quality for the price. 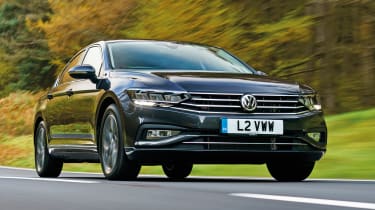 The latest Volkswagen Passat is a classy car, designed to punch above its weight against rivals from BMW and Mercedes. Excellent build quality, refinement and advanced in-car tech ensure that it does exactly that.

Pick SE Nav trim for an eight-inch touchscreen that runs one of the best infotainment systems on the market. Head and legroom are impressive both in the front and the rear, while even as a saloon, there’s strong practicality.

The 2.0-litre diesel is the pick of the engines, and it makes a very relaxing mile-muncher on the motorway, with fuel economy of up to 60mpg. The ride and handling might not match a BMW 3 Series’, yet it’s still comfortable and handles sweetly, even if it’s not that much fun. But for business users it’ll be more affordable than the BMW. 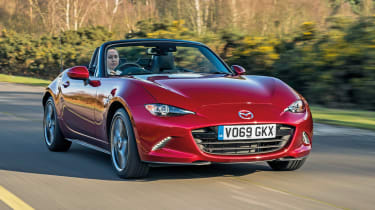 Why shouldn’t a company car be fun as well as making sense? The Mazda MX-5 is the most affordable sports car on sale, and its reliance on low weight over engine power makes it a tempting choice as far as BiK rates go.

The 130bhp 1.5-litre engine is the one to have, since it’s keen to rev and, together with the superb six-speed manual gearbox, loves to be worked. It’s also cheaper and more efficient, so it’s a win-win situation. On-paper fuel economy of 44.8mpg is rather good too, meaning you can use the MX-5 as an everyday car without breaking the bank.

It is a little short on practicality, but even base-spec SE-L trim gets everything you really need, including a seven-inch colour touchscreen with nav, cruise control, keyless entry, DAB, air-con, smartphone connectivity and heated seats.

Just remember that the MX-5 is a compromise regardless of its affordability; that soft-top roof means refinement does take a hit on the motorway, although the car is brilliant when the sun shines. Plus you’ll struggle to get much more than one big, squashy bag in that 130-litre boot. 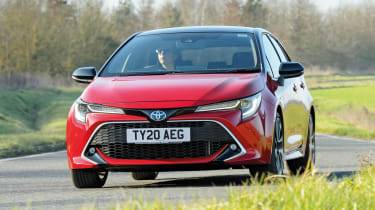 As long as you focus on the things the Corolla is really good at – ride comfort, refinement and low running costs – it’s obvious why this is a great company car choice. Then you can ignore the Toyota’s few drawbacks, like an infotainment system that lags far behind those of rival makers, while there are more practical cars in this class.

Most important, efficiency is super-impressive for a family hatch; the 1.8-litre petrol-hybrid powertrain returns between 55 and 65mpg, and emits just 101g/km CO2 under the stricter WLTP regime. This means the Toyota’s BiK numbers are impressively low. For example, lower-rate taxpayers will only have to fork out £97 per month.

The car’s chassis also means it’s actually surprisingly good to drive, even if the powertrain isn’t the sportiest. Treat the Corolla as intended and it’ll reward you with a comfortable ride and precise handling. Interior build quality is impressive too, although the design lacks a little flair. We reckon you should go for Icon Tech trim to strike the right balance between kit and affordability. 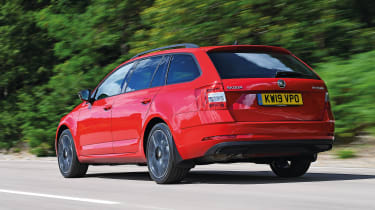 A new version of the Skoda Octavia Estate is due shortly, but this outgoing model is still an absolute star and worth picking up if you’re in the market for a new company car.

The 2.0 TDI 150’s official economy of up to 54.3mpg means you can rack up miles without massive bills. And with BiK bills of £129 per month for lower-rate earners, there’s so much on offer for such little outlay here.

Few can match the Octavia Estate for load space, with a cavernous 610-litre boot, rising to 1,740 litres with the rear bench folded down. There’s masses of head and legroom, so it’s a brilliant family car, while the chassis is composed and serves up a comfortable, refined ride.

SE L trim is the pick of the range, with larger alloys, LED headlights, front and rear parking sensors, the latest smartphone connectivity, climate control and an eight-inch touchscreen infotainment system with nav. There’s a variable boot floor too, while Skoda’s ‘Simply Clever’ touches make the Octavia so easy to live with.