We get behind the wheel of BMW's new 60mpg soft-top 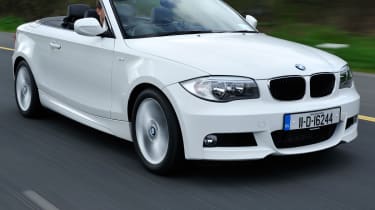 It’s difficult not to be charmed by this BMW. It’s rewarding to drive and is the best-looking 1 Series by a mile. Plus, despite supposedly playing second fiddle to the more glamorous 3 Series Convertible, it feels nearly as special – and is far cheaper. However, compared to its rivals, it’s not particularly good value, even if this 118d promises low running costs.

Could the best variant of BMW’s facelifted 1 Series Convertible be this unassuming diesel? Of course, we’d all rather have the high-powered 135i – but in the real world of escalating fuel prices, the stylish 118d M Sport, which is capable of returning around 60mpg, is very appealing indeed.
An open-topped version of the all-new 1 Series – likely to be badged the 2 Series – will come in 2013. But for now, buyers have to be content with the modest visual updates that were rolled out this year. These include a more aerodynamic front bumper and tweaked headlamps, which now feature LED running lights.
With the roof down, the compact cabrio draws both admiring and envious glances, while the cabin feels reassuringly premium. We would recommend forking out for leather trim, and steering clear of the body-coloured plastic inserts.

So, what makes the 118d so compelling? It’s not one single aspect, but the car as a whole. On top of its excellent efficiency, it emits only 129g/km of CO2. Power output is rated at a modest 143bhp, yet the 300Nm of torque is evident at normal speeds, so the BMW feels effortlessly fast. Ignore the 0-62mph sprint time; it’s the in-gear punch that makes the difference on the move – and the 118d has plenty.
Many convertible buyers may still baulk at the idea of an oil-burner, despite the economic advantages. And yes, without a roof to shield your ears from the engine, there is a tell-tale clatter on start-up.
However, at a halt in traffic the standard stop-start ensures serene silence. On the move, BMW has managed to quell the 2.0-litre turbodiesel’s noise brilliantly, and when you are driving quickly the newcomer rarely sounds like a diesel.
Fortunately, fast motoring is something this car encourages. While the steering is a little heavy at slow speeds, it’s direct, while turning into and then powering out of bends is very satisfying. All the driving controls are beautifully weighted, and the 1 Series flows from corner to corner. There’s not quite enough grunt on offer to unstick the rear tyres in the dry, but it’s still a rewarding car from behind the wheel.
You pay for that privilege, as the Convertible is not cheap. The similarly powerful Audi A3 2.0 TDI Sport Cabriolet is around £2,000 less, for instance. It’s not half as much fun to drive, though.
Share this on TwitterShare this on FacebookEmail