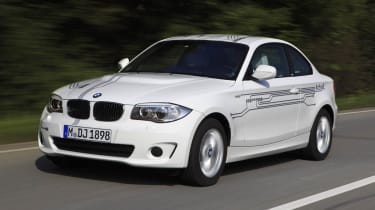 The ActiveE isn’t without its limitations - it’s heavy, there’s compromised boot space and the range is capped at 100 miles between charges. But as electric cars go, this is the best we’ve driven so far. The electric motor is smooth and punchy, the engaging rear-wheel drive handling of the petrol car remains intact and the cabin has all the luxuries BMW owners expect. Lessons learned here will be filtered into the production i3 in two years time, and the signs are good. With its carbon-fibre and aluminium construction – the i3 should be even more efficient and dynamic to drive.

The ActiveE is BMW’s second attempt at an electric car, and it picks up where the MINI E left off. Although it won’t go on sale in showrooms, over 1,000 examples will be trialled this year in the USA, Europe and China – 160 of which will be used at the London Olympics. And the data gathered will be fed back into the production version of the electric i3 supermini, due in 2013.

Unlike the two-seater MINI E, the ActiveE has just as much interior space as the standard 1 Series Coupe – the only compromise being a boot size reduced from 370 to 200-litres. The lithium-ion batteries are stuffed where the engine, gearbox and fuel tank would normally be.

Like all electric cars, the maximum 250Nm of torque is delivered right from a standstill, but here a new synchronous motor refines the delivery so that maximum torque is maintained for much longer. The result is strong acceleration all the way to the 90mph limit, although the lack of engine roar and gearchanges makes it feel more pedestrian than the figures suggest.

Lift off the throttle and the motor reverses to become a generator, feeding energy back into the batteries, which can boost the range by up to 20 per cent.  The effect is more severe than in the Nissan LEAF and makes for jerky progress to begin with. Once you’re used to it though you rarely use the brake pedal, instead letting the braking effect bring the car to a stop.

The claimed range, after an overnight charge from a standard UK socket, is 100 miles. Start to explore the ActiveE’s performance though and that drops off fast, which is a shame because like the standard 1 Series, it’s great fun to drive. You can sense the extra 300kg when you change direction, but all that weight is balanced 50:50 front and rear, and mounted low in the chassis so it feels incredibly planted in the corners.

Besides a bonnet scoop, no exhausts, blue stitching on the seats and a revised instrument cluster, that displays remaining charge and the instantaneous energy being used, the ActiveE demands few compromises from the driver. It’s convincing proof that electric cars do have a place in the premium market.